It may seem like I have foresworn sports cards lately, but that really isn't the case.  I swear it isn't.  It is just that these horse themed tobacco cards are really quite affordable.  Take for example, the 48 card 1938 Gallaher Racing Scenes set which I am about to show  These cards are in excellent condition and I was able to get the complete set for $11 delivered.  I still collect sports cards, but am going to skip the January OKC show in favor of saving up and going to a show down in Dallas in February.  So, the sports card posts may be a little skimpy for a while.

This set is my favorite horse themed set yet.  While it does show various scenes of horses and jockeys, it also shines a little light backstage, if you will.  For this post I'm going to focus on those cards. 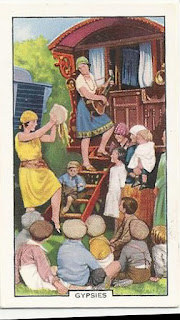 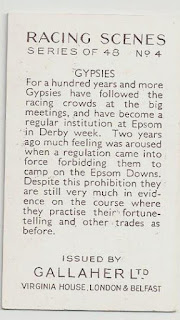 This is interesting. I am not sure if it is indicative of the casual racism of the early 20th century or not, but it certainly speaks to tensions between the Gypsy/Roma/Traveler community that came to Surrey each year for the Epsom Derby and the local gentry.  There is an interesting BBC photo  story about this topic. Here also is an interesting history of the Gypsy presence at Epsom. 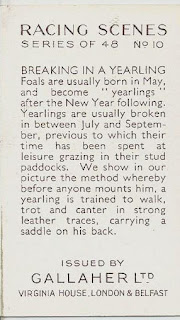 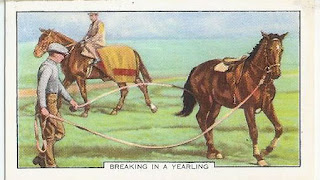 Here is a picture of a young horse being trained.  This is still a common training technique known as lunging.  It is often done on a lunge line, as seen here, or in a round pen without.   Part of the training is to train the horses to move through the three gaits. But, lunging is also a fairly typical  in various natural horsemanship techniques to develop a rapport between horse and trainer. 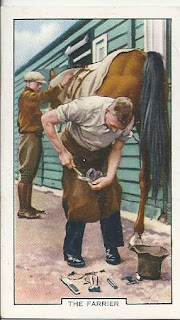 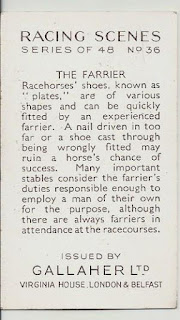 Ah, the farrier.  One thing you need to understand is that the horses hoof is the equine analog to our finger/toenails and as, such are constantly growing.  So, the farrier needs to come out periodically to trim the hoof and reset the shoes, if they are used.  It is a matter of preference how frequently the farrier comes out.  We normally go seven weeks between visits. We are lucky that most of our horses have good feet and don't require shoeing, only trims. Now something that isn't commonly known, sometimes even amongst horse owners, is that the farrier is an important contributor to the health of the horse.  For example: 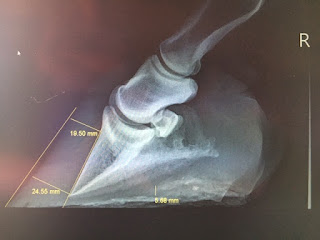 This is an x-ray of the front foot of a laminatic horse.  The triangle shaped bone is the coffin bone and is equivalent to one of our finger phalanges.  The surfaces of the coffin bone should be parallel to the hoof wall.  The hoof is attached to the bone with a fibrous tissue known as lamina.  If the lamina breaks down, the bone rotates, as you can see above. This is painful for the horse (imagine having to stand on your tiptoes for an extended period of time.) While this can have a mechanical cause, it is quite often attributable to a diabetic reaction to something in the horses diet. A good farrier is every bit as important as a vet in treating laminitis.  Generally, they will in the short term do some corrective shoeing to better distribute the pressure of standing more evenly across the foot. Over the longer term they will gradually trim the foot to get the angles back to normal. 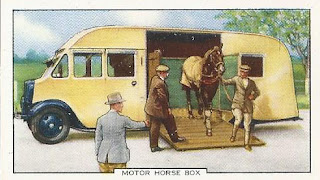 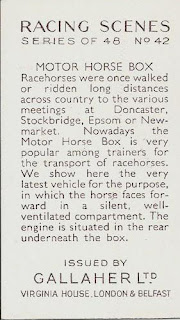 The motor horse box.  I am told this is still a common configuration for vehicles in Europe. Here is the US, as most of you have probably seen, is a separate trailer pulled by a pickup truck. 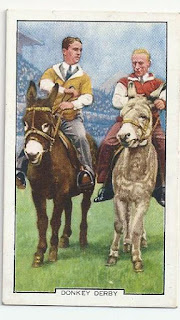 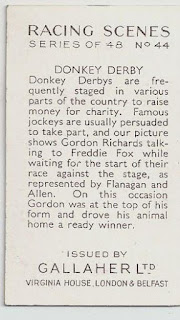 I just thought this was funny.  A local horse racing track does something similar for charity, but with ostriches instead of donkeys.

What I am listening to: Redemption day by Sheryl Crow

Posted by carlsonjok at 6:00 PM