Many of these tobacco sets I have been working on are from outside the United States.  I've only showed a few so far, but only one was from the US (N231 Kinney Brothers Great American Trotters.)  The others have all been from Great Britain.  Today, we are going to adventure across the Channel and show a small set from Germany: the 1927 Josetti Show Jumping Series, consisting of only 6 cards. 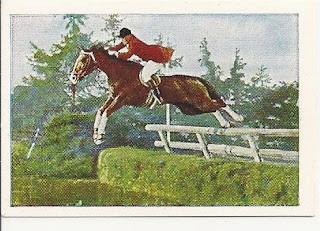 The cigarette manufacturing company was formed in Berlin in 1888 by Oskar Josetti, but he sold out in 1892 when he emigrated to the United States.The company continued and in 1896 introduced the popular JUNO cigarette.

The company itself was run, starting in 1905 by an affiliate of the American Tobacco Company. This continued for 10 years, until Deutsche Bank bought out the foreign shareholders. It became part of the Reemtsma company in the mid 1920s and continued production of JUNO until 1943 when, apparently, the factory fell victim to an Allied air raid.  Production began again in 1951 and continued until 2016. 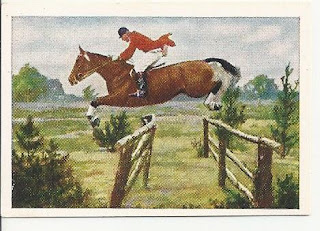 The stock for this set is rather thin.  It is more akin to heavy magazine stock than what you would typically associated with a tobacco card.  Perhaps the thin stock inhibited a lot of handling, as the cards I received are in excellent condition. 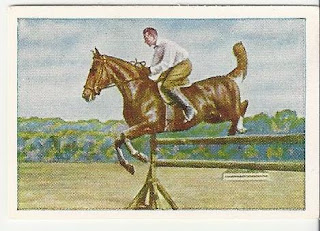 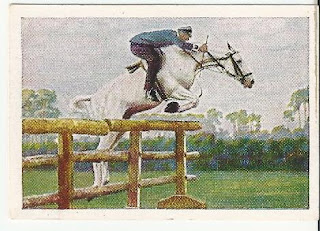 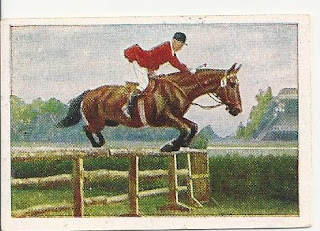 This guy above better be careful. His leg is swung back behind the girth leaving him off balance and without a base of support.. If the horse stumbles on the landing, he is dismounting in a rather spectacular, and ultimately painful manner. 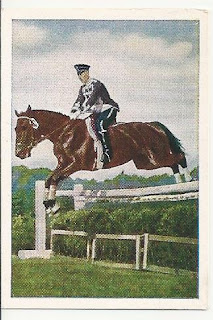 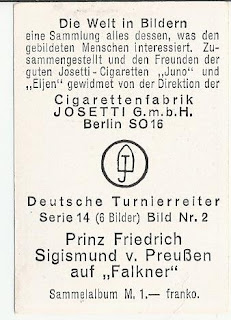 There is an interesting story behind this card.  The subject, Prince Friedrich Sigismund died on July 6 of 1927, the year this set was issued.  He was riding in an international competition in Lucerne, Switzerland when he fell from his horse. He got his foot caught in a stirrup and ended up underneath the horse where he was trampled, sustaining significant thoracic injuries that he succumbed to shortly thereafter.  I find this somewhat ironic because, of the several cards in this set, his depicts the rider with the best and safest position over the jump.

Coming up next, we'll go to the mid 1930s and take an ever so slight detour from tobacco cards.

What I am listening to: Thumbelina by The Pretenders