Minding Your Ps and Qs

I wasn't planning on posting today. Indeed, I probably wasn't going to post all week. You see, I am ungodly tired.  I was up way past my normal bedtime last night watching the NBA finals (Thunder Up!!!).  So, I was dragging my wagon through the work day today.  When I got home I found a bubble mailer from Greg over at Plaschke, Thy Sweater is Argyle.  But, I didn't have time to open it. I had to run out and buy a load of hay to put up for winter.

Because I am always looking to pinch a penny or two, I buy the hay out of the field instead of the barn.  Buying out of the field involves my wife driving the truck and trailer along a long line of bales laying on the ground and I load and stack them by hand. Over 100 bales weighing 55-65 pounds each.  That is like eleventy tons for those of you who are innumerate. Tomorrow those same bales have to be moved to the barn loft so I can go back and Wednesday and get another load (which will be moved to the barn on Thursday).  With NBA finals games on Tuesday and Thursday it is a sure bet that I am going to be the walking dead until the weekend. So, I figure to leave blogging until then.

But I cannot let this post wait. I will just have to gut my way through it.  The premise of this post is this: baseball card bloggers are brain damaged.

Greg is no exception.  I know he is a college student, but it has to be a clown college, because he has a serious reading comprehension problem.  This all started a while back when I posted that I pulled a Carlos Santana Auto card (numbered 3 of 5) from a box of 2010 Tristar Obak.  Greg was interested in trading for it, but it took us a while to find some cards I needed that he had access to.  That is where the problem came in.  After a little back and forth, I gave him some options as to things I'd like in return.  I clearly listed them as A or B or C(1).   Problem is Greg does not understand that "or" generally signifies a list of mutually exclusive options.  I wrote "or" but he interpreted it as "and."  So rather than picking one of the options, he got me everything.  Specifically, a couple cards for my Johnny Antonelli player collection and three high number cards for my 1971 set. 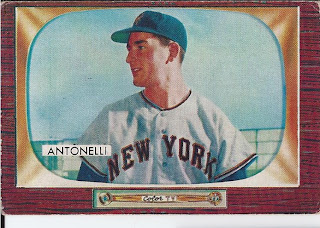 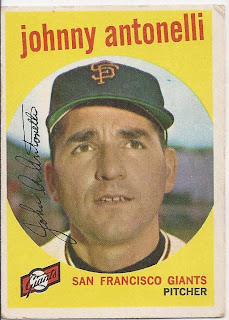 1959 Topps. This is the last Topps Antonelli card I needed for the PC. 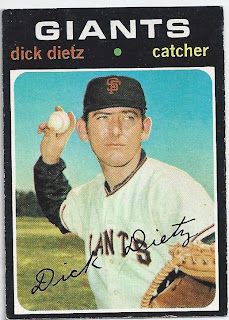 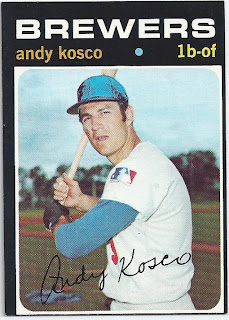 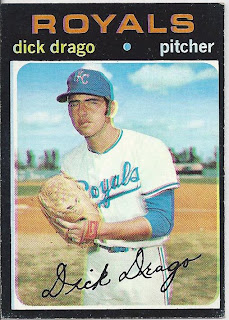 As you can see, these are super clean and sharp cards.  And all high numbers. I am really embarrassed getting such nice cards back for the Santana.

Anyways, thanks Greg.  I appreciate the generosity and will do my best to repay it in our next trade.

(1) At least I hope I said "or."  No way in hell I am going back to look at our emails. I'd rather live with the comfortable illusion that Greg don't read no good no how than to discover I did say "and."  I'd feel like a real putz.

Added it Edit:  In 1954, Antonelli was stellar in the post season also.  He appeared in two games for the Giants in the World Series against the Cleveland Indians. He threw a complete game victory in Game 1, allowing 8 hits and 1 run, while striking out 9.  Then he saved game 4 (the Series winner) by pitching 1.2 innings in relief, allowing no hits or runs and striking out 3 of the 6 batters he faced.
Posted by carlsonjok at 8:35 PM