My Week in Review, Part 3

Prior to my business travel, a cat had started hanging around by our barn. She'd be out there generally for the morning and afternoon feedings and gone otherwise. When it became obvious she intended to be a regular fixture, we decided to get her spayed. So, we trapped her in the barn storage room overnight, took her to a vet clinic to be spayed the next day, brought her home and kept her locked up another day to recover. It made sense to us. We don't want a host of kittens running around. So, problem solved, right? Well, not so much.... 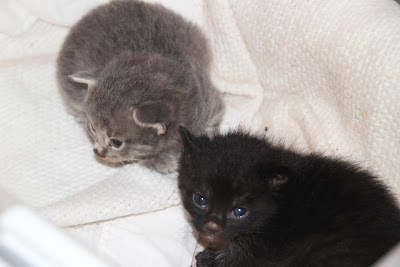 Apparently, she had a litter just prior to showing up on our doorstep and moved them into the barn eaves while I was out of town. Anybody want a cat?

I got home around 9 PM Friday, so I slipped into my normal weekend routine on Saturday which involved, of course, at stop at the card shop. 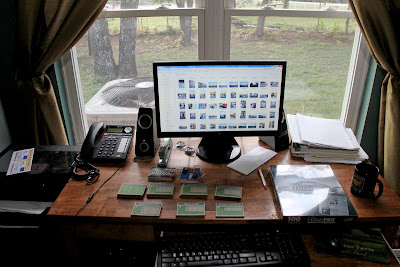 What you see here are about 160 more cards from 1977, bringing my close to being half complete with that set. The two cellophane wrapped decks in the back are 2008 and 2009 team sets for the Oklahoma City Redhawks that I bought at the game against Salt Lake City Saturday night. I bought those two years for a reason. 2008 was the year Nelson Cruz played in OKC and 2009 was the year for Neftali Feliz. Alas, I got ripped! In the 2008 set I got two (count 'em, two!) Jason Botts and no Nelson Cruz's. Given that the 32 card sets are only $4.95, I'll probably just buy another 2008 set when I go to the June 3 game against Round Rock.

And, of course, I bookended my trip to France with another baseball game. 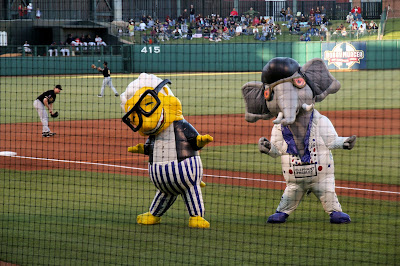 Harry Canary and Elephant Presley of the Zooperstars. 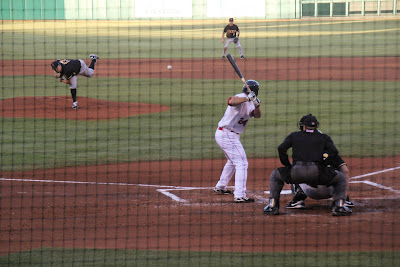 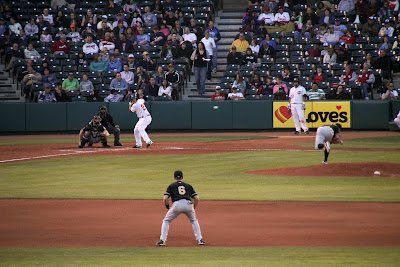 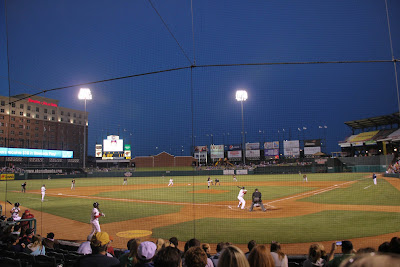 Salt Lake City triumphed 2-1 in a pitchers duel, with minor league journeyman Ryan Ketchner taking the win while hot Astros prospect Jordan Lyles got tagged with the loss.
Posted by carlsonjok at 3:00 PM