Wow. Yesterday was quite the day. When I opened up the mailbox at the end of the day, I found four packages of cards awaiting me. There were two single card EBay purchases and two large trade packs. I am not going to cover the trade packs in this post. The generosity of the two trading partners was significant and deserves to have their own posts. I intend to get to them before I leave town on Saturday for a getaway weekend, which is followed immediately by a week long business trip. But, for now, here I am going to cover the two single cards I received for my Paul Blair player collection. 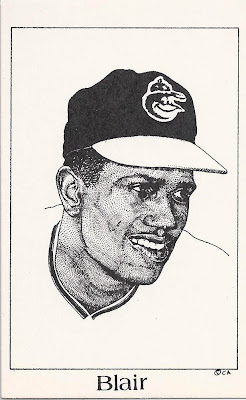 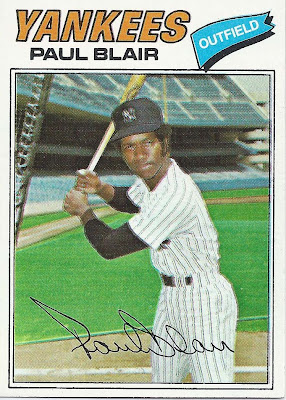 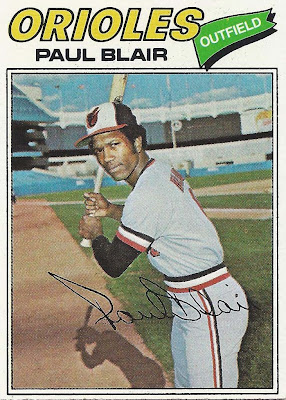 The first card is actually Blair's 1977 Burger King Yankees card, printed by Topps and distributed at area BK restaurants. With the exception of the card number, the backs of the two cards are identical right down to the same cartoon. But, obviously, they show Paul on two different teams. Both photos were taken in Yankee Stadium, though it appears on different days (thus, no airbrushing.) The sky in the Yankees pictures is overcast, while the Orioles card shows a partly cloudy sky.

Blair was traded from Baltimore to New York on January 20, 1977 for Rick Bladt and Elliott Maddox. At the time, his offensive output was down significantly and he was in the waning days of his career. With the Yankees, the eight time Gold Glove winner was mainly an late inning defensive replacement with occasional starts when one of the regular outfielders was spelled. It was in the former role that Blair played a role in one of the more infamous episodes in baseball.

On June 18, 1977, Yankee manager Billy Martin thought that Reggie Jackson was loafing in right field and had, consequently, allowed Jim Rice to leg what should have been a single into a double. Billy sent Blair out as a mid-inning replacement. What ensued when Jackson returned to the dugout was a nationally televised confrontation between the slugger and the manager (who was a slugger of a different type.) You can read the contemporaneous account in this Phil Pepe article.
Posted by carlsonjok at 6:05 AM