I had a pretty good time at the October OKC card show.  I managed to snag a decent amount of vintage and decided to spend some time looking through the discount boxes of modern cards.  I mainly just grab a stack about two inches thick and quickly scan through them to see if anything interests me. I probably miss a lot this way, but since modern cards aren't my collecting focus, it doesn't erally matter.  It is more about the experience. So, what did I find? 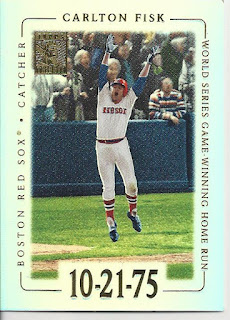 I got 15 2003 Topps Tribute glossy cards. There were more in the box, but I skipped over the modern (1980s or more recent) and focused on the old timers.  In retrospect, I probably should have grabbed them all because I really like these cards and wouldn't mind putting the set together.  I chose this Fisk card, with it's iconic image, as the representative in recognition of the Red Sox seemingly inevitable march towards World Series victory. 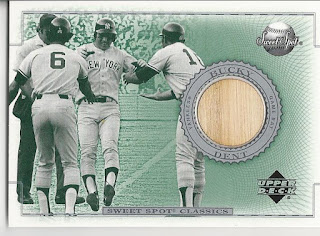 Because I hate the Red Sox, I had to sooth my soul with this Upper Deck bat relic, also featuring an iconic image of Bucky Dent crossing the plate after hitting a clutch home run in the 1978 one game playoff for the AL East title . 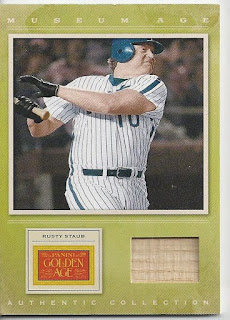 2012 Panini Golden Age Rusty Staub bat relic.  Lately, I like finding cheap relics of great players. There is no rhyme or reason to what I look for or get.  Just a good player and a design that appeals to me. 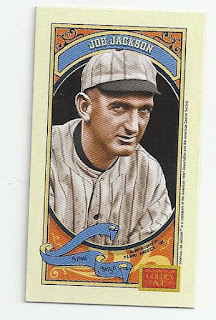 Again, this fills no need in my collection. Just a 2014 Panini  Hindu back Joe Jackson Mini. 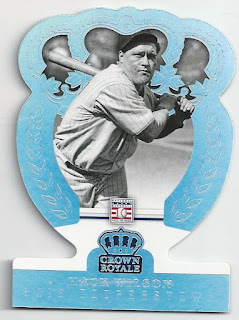 2015 Panini Royale Crown die cut Hack Wilson (43/75). Interestingly the surface of this card is actually a shiny silver even though it scanned blue. 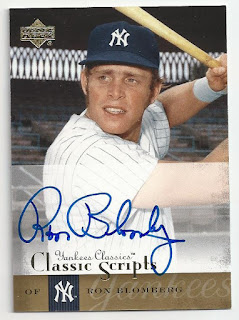 This is from the 2004 Upper Deck Yankee Classics set. I built this set back when I first got into collecting.  I had bought a box and got three autographs in the box, but no one to elicit a big reaction: Kevin Maas, Don Baylor, and Rick Cerone.  It might be fun to add more autographed cards from this set, but it isn't something I am going to prioritize.

What I am listening to:  Blacklist by Exodus (NSFW)