After the complete washout at last week's OKC show, I decided to head up to the monthly mini-show at Al's Sports Cards in Edmond.  Al had mentioned in one of his email notifications that there was a new vintage vendor, so I decided to check it out.  There was indeed a new vendor and he did indeed have vintage.  But only stars and minor stars. No commons.  Another regular seller had a really nice 1973 Mike Schmidt rookie card, but he wanted $125 and I wouldn't go over $75 for that card.  That guy doesn't bargain much, so I didn't even bother making an offer I knew he wouldn't accept.

So, I ended up talking a bit with Bill from Wichita and (believe it or not) Roger from Sports Memories of Oklahoma.  Roger is the fellow I was hoping was going to be at the show last weekend but, as it turns out, he was doing a show up in St. Louis. He wasn't selling today. Rather, he was buying and I watched him close a deal with Bill for a lot of around 100 1954 Bowman cards (including the Mantle) for somewhat over $600.  It was a pretty sweet deal that Bill had offered me last weekend, but I passed on since I don't have that kind of scratch laying around. 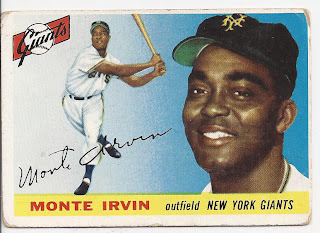 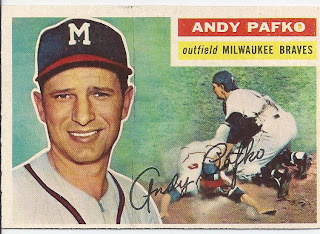 That was money I was planning on using towards the 1973 Schmidt rookie, but the opportunity to get a stack of cards from two sets I really like was too good to pass up.  Of the 30 1956's, only 3 were duplicates for me.  This puts me at 76 cards, out of 340 total, from that set.

So, this will likely push completion of 1973 into 2014, but I think that is worth it.  To get so many cards from these two awesome sets for a little more than a dollar each was awesome!

Posted by carlsonjok at 2:23 PM