Catcher has been a position the Yankees have struggled at since Jorge Posada's move to DH and subsequent retirement.   In 2011 and 2012, Russell Martin was the main backstop and did a creditable job behind the plate.  And, while he did put up some decent power numbers, his offensive production dropped off precipitously from his days as a Dodger.

Martin moved to Pittsburgh last off-season and 2013 opened with Francisco Cervelli as the starting shortstop with Chris Stewart filling in as backup. 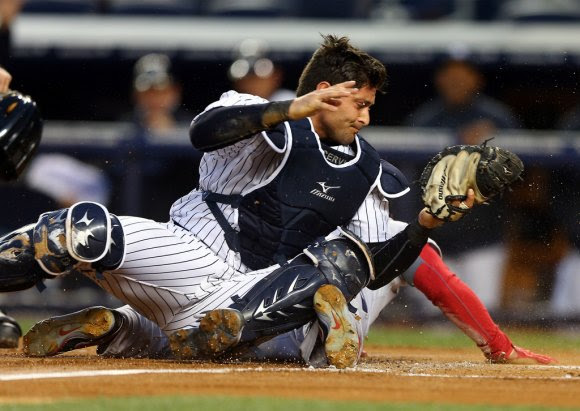 Frankie started of the season well enough, but a broken hand on a HBP sent him to the DL before April was out.  A subsequent 50 game suspension due to being caught up in the Biogenesis scandal was enough to put paid to his season.

The Yankees promoted Chris Stewart to the starting catcher with Austin Romine being called up to back him up.  And there ended the offensive production.  That isn't entirely fair as both did have some game winning hits during the season.  But, for the most part, catcher was an offensive desert for the Yankees last year.  Stewart is your quintessential defense first, light hitting player.  He is fine for occasional starts and  perfect as a late inning defensive substitution.  But that is the limit of his abilities.  Romine has been a solid producer offensively and defensively in the low minors, but with a history of injury  and only 35 games at AAA before his call up, he wasn't ready to make a show of it offensively yet.

A late season call up of J.R. Murphy, just behind Romine on the organizational depth chart, didn't show us anything great. He looks to me like a carbon copy of Romine just a bit younger.  Both could use more time in the minors to season.

Waiting even further in the wings, behind Murphy, is Gary Sanchez, who appears to be a solid  defender and wields a more productive bat than anyone ahead of him on the depth chart.

So what is the plan for 2014?  Well, I guess I don't have to opine on that one as the Yankees have already revealed their plan when they signed Brian McCann to a 5 year, $85M contract.  I am torn on the contract.  I am glad to see New York sign a potent left handed bat, what with the short right field porch in Yankee Stadium.  But, I am also concerned some about McCann's durability given that his games caught has dropped off the last few years.  I also am not happy about the length of the contract.  With the anticipated talent down on the farm, I'd rather see McCann signed for 3 to 4 years.  But, I get that they probably needed to give him 5 years to get him to sign.  Further, the speculation is that McCann could move to 1B or DH in the latter years, which would open up the catching position for Murphy or Sanchez.

But, what about the backup?  I don't know what the Yankees will do. They seem high on Chris Stewart (having signed him as a free agent in 2008 and trading for him in 2009 and again in 2012.)  But the lack of offensive punch is hard to overcome.  The better bet, and my preference, is to make Cervelli the backup.  As it stands, Frankie has good offensive splits against left handed pitching. Good enough that I would platoon him with McCann behind the plate. McCann catches against right handed pitchers, which would be good for about 100-110 games. When the Yankees face a left handed starter, move McCann to DH and let Cervelli catch.  It keeps Mac's bat in the line up while limiting the wear and tear he would suffer behind the dish.

I'd release Stewart, or offer him a minor league coaching position, depending on whether he wants to try to continue playing or not. Further, I'd shop Romine and continue to groom JR Murphy and Gary Sanchez to take over catching duties in 3-4 years.

So there you have it, my brilliant plan for catcher for 2014.

Next up:  The starting rotation
Posted by carlsonjok at 12:50 PM