A Nice Round Number

I first dipped my toe back in the collecting world back in late 2010 when I decided to try and collect the various Paul Blair trading cards. I figured there was about 16 total, spanning his major league career that lasted from 1965 through 1980.  Little did I know.

Two and a half years later, I know better.  I have come to discover all sorts of regional issues, re-issues, and sets focusing on players of the past. My Paul Blair player collection has long since past 16 cards. Indeed, today I crossed into triple digits with two EBay arrivals. 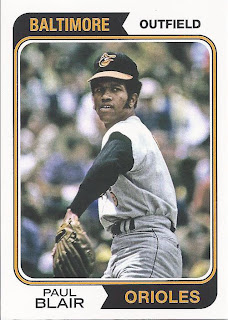 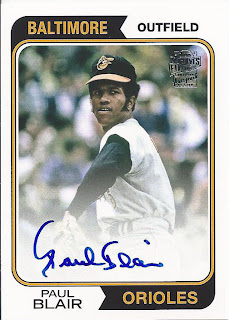 These cards are the 99th and 100th unique cards in my Blair PC.  They are modeled after the 1974 Topps set.  You may recall my recent post about 2003 Topps Fan Favorites, where I complained about how they designed the card backs.  My beef was that they only showed the players career statistics with the team he was featured on the card with.  This 2013 Archive set does the backs a bit better, in my opinion The back is a exact duplicate of the actual 1974 Blair card, except for the card number (92 in 1974 vs 224 here) and the copyright text at the bottom.  Indeed, even the facsimile autograph on the back is duplicated from 1974.  You can see that it is different that his current day autograph above it.

Well, I have been staring at the screen for 5 minutes. I don't have anything left to say, but I haven't exactly got an ending with that previous paragraph, so I am not sure what to do other than to say that I have a couple other Ebay finds on their way to me that I will be all excited to share next week. Hopefully, I'll have found my muse by then.