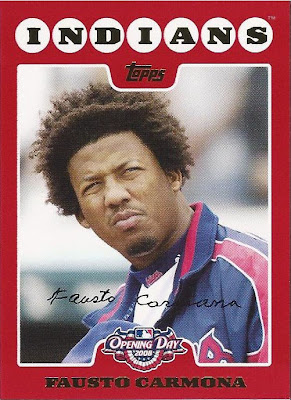 What is there to say here? Carmona went 19-8 the previous season and finished fourth in the balloting for the AL Cy Young (well behind teammate CC Sabathia) and this is the best picture they can come up with? And, no, I am not going to make a Buckwheat joke, otay?

Fun Fact: I have only ever been to one major league baseball game. It was a Cleveland Indians home game in late 1991. I wasn't really following baseball then, so I don't remember much about it, except that it was near the end of the season, it was a day game, and it was cold. I think it was during a home stand against Milwaukee between October 1 and 3.
Posted by carlsonjok at 4:19 PM