I realize the gap between this post and its predecessor isn't all that long, at least for me.  I am trying to get ramped up to post more about my signed 1961 Fleer project, since when I last left off I was posting about my 33rd such card, and I just picked up my 61st.  But, I want those posts to be informative and that involves taking time to research them.  Currently, I am really busy at my new job and I have several large projects I want to finish around the farm before the cold weather sets in, so I have not found the time to sit down and focus on the research.  So, this is basically a throwaway post.

As you know, prior to working on a signed 1961 Fleer set, I was working on a signed 1963 Fleer set. And, when we last left that project, I had autographed versions of 65 out of the 66 cards in the set; lacking only Roberto Clemente.  I have only ever seen that card come up for auction a couple of times and it always finished waaaay outside my budget, Another showed up in the Most recent Memory Lane auction. The opening bid was $2,500 so I was out of the running before the auction even opened.  The auction closed last night and check this out: 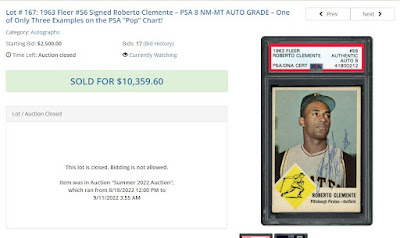 Absolutely crazy.  I cannot even imagine.  If I had $10K drop into my lap I have plenty of things I could do with it: put it towards a new car, knock a chunk off my mortgage balance, put it away for retirement, the possibilities are legion. Buying this card would be pretty close to the last thing I would do.

Anyways, back into my hole.

What I am listening to: Resignation Superman by Big Head Todd and The Monsters

Posted by carlsonjok at 4:38 AM