It has been a bit over a year since I last posted about my autographed 1960 and 1961 Fleer project.  In that post, I shared that I won a lot of 47 signed 1961s, of which I needed 18.  The other 29 were shipped off to an auction house and I netted back about half of my original lot cost. I've added a few more over the last year and, as of today, I am sitting at 61 signed cards from this set. So, we have some catching up to do. 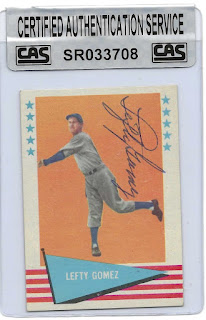 Hall of Famer Lefty Gomez (1972 Veterans Committee) pitched in 368 games across all or part of 14 seasons. All but one of those games were with the NY Yankees between 1930 and 1942.  The sole game where he didn't where the pinstripes was an ineffective 4 2/3 inning start for the Washington Senators in the first game of a twin bill on May 30, 1943.  His finest season was probably 1934, when he went 26-5 with a 2.33 ERA and finished 3rd in the MVP voting behind only Mickey Cochrane and fellow hurler Charlie Gehringer. Oddly enough, he finished ahead of teammate Lou Gehrig, who was 5th in voting despite hitting for the Triple Crown (the only time he ever did so.)

His best game may have come on May 24, 1932 against the Philadelphia Athletics. Lefty pitched a complete game while allowing only 3 hits and 1 walk against 13 strikeouts. One of the hits was a ground ball single by Jimmie Foxx, who was hitting .441 at the time and was well on his way to the first of his three MVP seasons.

Gomez was known as one of the funniest men in baseball, though much of his humor was self-deprecating. An example was when Neil Armstrong first set foot on the moon in 1969, and he and NASA scientists were puzzled by an unidentified white object. Upon hearing of it, Lefty said, “I knew immediately what it was. It was a home run ball hit off me in 1937 by Jimmie Foxx.”

What I am listening to:  Down by the Water by The Decemberists

Posted by carlsonjok at 5:46 PM