I've been neglecting my blog lately but, dang, I just haven't had the energy to do much of anything related to card collecting or blogging about card collecting. Work has been busy and the weather has been hellacious. We are on our 12th straight day of 100+ degree temperatures (high yesterday was a nice round 110F) and (at least) fortieth straight day of 90+ degree temperatures. Having grown up in the Northeast, I suffer in this type of weather. After a full day of work, and an evening of chores (something you have in abundance when you live on a farm), I just don't have the inclination to do anything except fix a dinner with a minimally acceptable number of food groups and go to sleep. To make matters worse, the only significant precipitation we had was a 1.6 inch frog strangler on May 14 that a) came down so fast that it mostly ran off into the pond and didn't soak in, and b) was accompanied by enough hail to basically total the roofs on my house and barn.

Baseball cards? What are those?

Well, it isn't quite that bad, but almost. I have made progress on Topps Series 2, and only need 30 more cards to complete the series. And I've had a few mail call deliveries. I did manage to add 1966 and 1971 O-Pee-Chee Paul Blair cards to my player collection and picked up a neat card that I've been trying to acquire for a while. 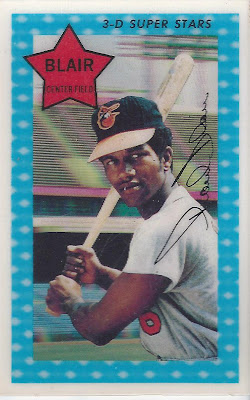 A 1971 Kellogg's 3D Paul Blair. I got this from Burbank Sportscards for about $12 delivered, including shipping. I have seen these cards sell graded for up to $100. Why, you might wonder? It is an interesting, but not particularly noteworthy card of a minor star in the late 60s/early 70s. Well, let's look at the back. 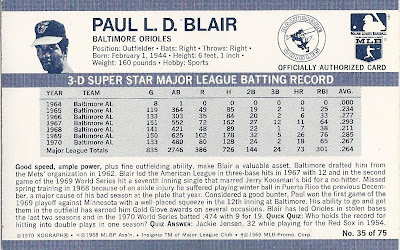 See that? No? Let's look closer. 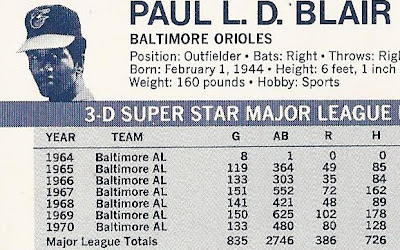 See it now? No? Okay, don't waste alot of time on this. Look at the 1970 runs scored total. Then go here and compare. Yep, this is a jen-yoo-wine error card. Which means I may need to track down the corrected version. I haven't decided if I will or not. After assessing everything I have put into assembling a master set of 1974 Topps (only one card short), I think a better use of my card budget may be to forgo chasing variations and just stick to finding unique cards for my PC.

One note about this card: The text in the back doesn't mention that Blair's solo homer in Game 3 of the 1966 World Series was sole run in a 1-0 Baltimore win. I would have thought that would be more of interest than the note about breaking up Jerry Koosman's no-hitter in the 1969 Series, given that the O's won in 1966 and lost in 1969. But, I don't write copy for baseball cards, so what do I know?

An interesting Paul Blair note: During his first stint with the Yankees, Blair wore uniform number 2. Following his release in 1979, Number 2 was worn in succession by Darryl Jones, Bobby Murcer, Tim Foli, Dale Berra, Wayne Tolleson, Mike Gallego, and finally, Captain Clutch himself, the star of this weekend, Derek Jeter. I would guess that no future Yankee will ever wear Number 2 again.

Coming tomorrow, before I probably neglect my collecting and blogging for a few more weeks, will be an update on some progress towards a set I had almost given up hope on completing.
Posted by carlsonjok at 2:28 PM