Coming Up for Air

So, it has been 5 months since we last talked. My last day on my job was Thursday, so I am officially unemployed.  I only half-heartedly looked for a new job over the last few months. I've decided I want to shift from in-house roles to doing contract consulting and I have already aligned myself with one consulting firm and am starting the process to sign up with a second.  Additionally, I have an introductory interview this week for in-house roles with a third consulting/business intelligence firm.  So, while I am a bit unbalanced about not having a job, I am moving forward and, hopefully, something will pop up soon.

My hobby activity has been curtailed significantly over the last year, once I knew I would be moving on.  While it hasn't stopped, it has become more focused and I've gotten a few things accomplished that I might not have otherwise.

For example, I finally finished my 1968 Topps set in December. 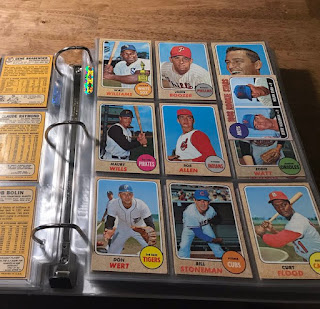 The last card was, unsurprisingly the Nolan Ryan rookie card.  I had made no progress on this set for over 2 years because of how expensive that card was. I could never find a card that was both within my budget and condition requirements.  However, I finally found one in an auction that met both criteria.  I ended up paying a bit over $330 for it. While it was the third most I have ever paid for a card, it was a steal at this price.  The main issue was fading on the left side of the card due to exposure to sunlight.  But, it has great eye appeal, so I am tickled to death to have it. 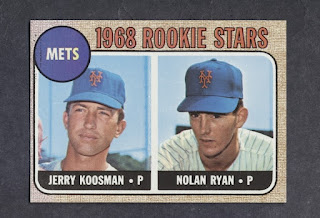 In January, I finished my 1960 Topps set.  The last card was the Chicago Cubs team card. 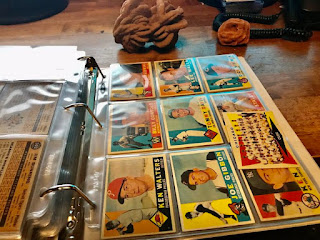 Since then,  I went the OKC show in February, the Dallas show in March, then nothing until this weekends OKC show.  In those shows, I've worked on the Topps sets from 1958, 1969, and 1973 Football. I chose 1958 since I bought the Mantle card years ago before prices went nuts, 1965 because I am down to 6 cards to complete, and 1969 as it is the most affordable of the remaining 1960s sets.

Anway, I had a good haul at this weekend's show: 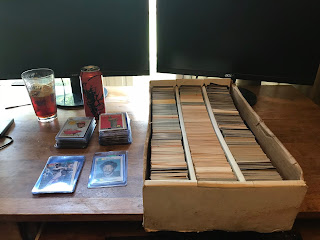 My wife collects mid-century modern barware and asked me to stop at a local flea market to check out something and I found that big box of junk wax for $10.  What can I say?  I would bet the main value of the box is as kindling, but I am pretty sure I can get more than a sawbucks worth of fun out of it.

What I am listening to:  One More Night by Micahel Kiwanuka