This is my follow-up post where I show the results of trying to trace the pedigree of my horses back to one or more of the various subjects in the 1933 Player's Derby and Grand National Winners cigarette trading card set.  Over the years we've owned 9 different horses.  Of those, only 5 were breed registered and I no longer have access to the papers for 2 of them. So, I'll only look at the remaining 3. 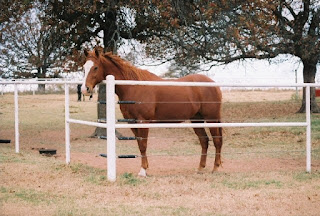 Jack was our first horse.  He was a registered American Quarter Horse (Flowithease). Most people think of quarter horses as bred to excel in ranch work.  But, the progenitors of the quarter horse were originally bred in colonial America, crossing English thoroughbreds to native horses, to be very fast over a quarter mile stakes race.  With the western expansion of the 19th century, these original quarter horses were eventually bred to native mustangs and developed into the ranch work savants most people are familiar with today.

We bought him on the advise of my wife's trainer shortly after she started her first job after law school.   Jack was originally bred for the racetrack and was nearly half (7/16 to be exact) thoroughbred. He never made the track and changed hands several times before he came to us.  Given his breeding, he was probably bought with the idea of being a barrel racing horse. But, he had an indifferent work ethic and probably never made it to the rodeo grounds either.

My wife does the English riding disciplines (jumping and dressage) and he was to be her show horse.   Jack was a pleasant fellow and smart as a whip, however with his lack of ambition it was a struggle for my wife to learn how to ride when she had a horse that needed to be convinced to do much of anything. Eventually we gave up on him ever being a successful show horse and he became my trail horse, a role more suited to his temperament.    We had to retire him in 2011 at the age of 25 after, first, a broken coffin bone in a front foot, followed by a particularly nasty case of EPM (Equine Protozoal Myeloencephalitis)  He took to retirement easily and passed away in 2016 at the ripe old age of 30.

As quarter horses go, he had royalty on the sire side of his bloodlines with the famous racing quarter horses Easy Jet and Jet Deck, as well as the AQHA Hall of Fame stallion Three Bars (who was actually a registered thoroughbred.)  As far as his relationship to subjects of the Player's set, he goes back to Blenheim and Gainsborough on his sires side and Sunstar on his dams side. 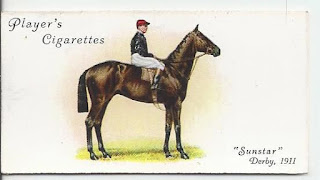 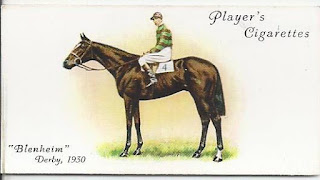 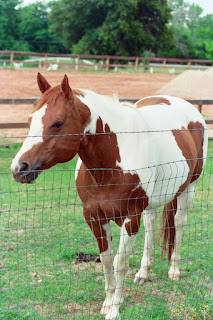 Even as Jack remained a solid horse into his early 20s, we were aware that his eventual retirement loomed and we were aware that I would need a mount to take his place.  As it was, we had friends who farmed 1300 acres in Pauls Valley and were pasturing a small contingent of paint horses for an acquaintance that was becoming too old to care for them.  We often observed these horses when we visited our friends and considered buying one as my next horse.  I originally focused on one mare about 10-12 years old.  I went out to into the pasture to assess her disposition. She was approachable, but when I tried to pick up one of her feet, she tried to kick me.

Changing focus, I went through the same routine with a 5 year old who happened to be the daughter of the first mare. She was much more accommodating despite having  been minimally handled (and not halter broke.)  So, we ended up buying her and naming her Stormy because her APHA registered name was Gayle's Stormy Night. After we brought her home, I spent some time working with her on her ground manners to ensure she was safe to handle.  After a few weeks, we took her to a trainer in Guthrie, a town about hour north of us.  The trainer came highly recommended and he had saddled, climbed on and rode her around a round pen within an hour of us arriving.  If you are interested, you can see a video featuring the trainer here.

I was able to ride more when I worked from home, but over the last 7 years, since I started commuting in to an office for work, I've barely ridden as what time I have in the evenings was usually consumed with various farm chores and projects.  With many of the projects complete, my intent is to send Stormy off to a trainer for a tune up and to start riding more this spring and summer.

Stormy is a registered American Paint Horse (Gayle's Stormy Night), which is basically a quarter horse with the distinctive pinto coloring. While Stormy's APHA pedigree was bred for conformation classes and roping, so she was put together than Jack, as you can see below. She has a shorter back and neck, shorter legs and was generally much more stout. 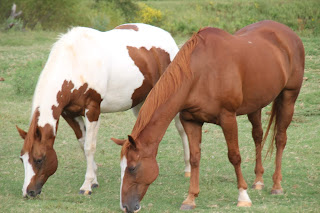 I don't have an encyclopedic knowledge of APHA bloodlines, but she does go back to a number of famous Quarter Horses, including the aforementioned Three Bars, as well as King P-234.  As far as relations in the Player's set, she goes back to Blenheim and Minoru on her sires side and Sunstar and Durbar II on her dam's side. 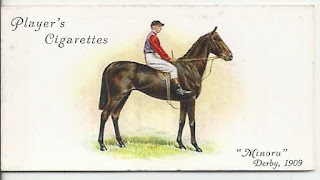 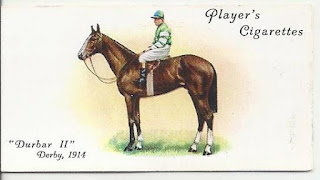 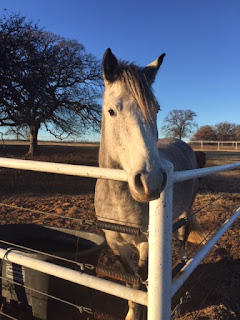 Traeh is my wife's new show horse.  As her previous show horse crossed into his 20s, he was given a well deserved retirement.  Traeh is 6 years old and is an Irish Sport Horse (A Touch of Heart).  An Irish Sport Horse is normally a cross between a registered Irish Draft Horse and another breed, generally a thoroughbred.

I have always said, somewhat facetiously, that all horses are given an equal amount of attitude to spread throughout their body. Thus, large horses, like drafts or foundation quarter horses, tend to the mellow side.  But, as you traverse the spectrum of size in horses, the attitude becomes more and more concentrated in a smaller package . Thus, ponies and miniature horses have so much sass and attitude that they are virtually untrainable (unless they deign to let you train them, in which case it isn't enitrely clear who is training who.)

Traeh is an exception. She has a pony attitude in a full size horse body. Luckily, she is people oriented so she has never tried to throw a rider off, which ponies are wont to do.  But, she can decide at timesshe knows better than her rider and has presented some training challenges. She is also quite bold.  While most horses will move away from strange things like, say, a riding lawnmower, Traeh will come over and investigate.  Because of the combination of sass and bravery, she is being brought along slowly as she cannot be trusted to understand when she is trying to do more than she is ready for or capable of and she must listen to her rider in such situations.  But, she is going to become a fine show horse in the next couple years.

What horses in the Player's set is she related to?  Cameronian and Sansovino. 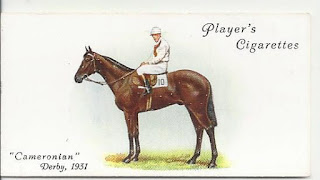 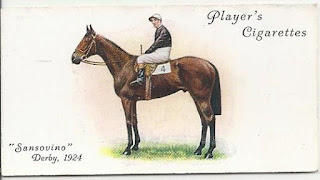 Anyways, I've prattled on enough. But, I do have more tobacco issue cards to show in the days ahead, including one that can rightfully be considered a direct ancestor of the most iconic sports card ever. I also have a few sports card things to share, so as I don't lose what few readers I have. Stay tuned!

What I am listening to:  Straight Up and Down by The Brian Jonestown Massacre