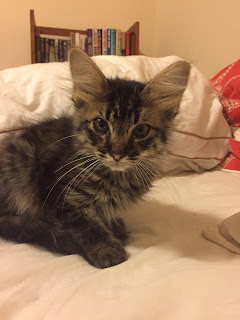 He is tiny, only 6 or 7 weeks old. He looks a lot like our first (long departed) cat Boxcar, who was a Maine Coon.  Maine Coons are the gentle giants of the cat world. Very chill. Raymond has big old ears and paws and the vet thinks he may get up to 15-18 pounds. So, we are hoping we have another Maine Coon We get what lands on our doorstep, so to speak. So, this may be a little bit of serendipity.
Posted by carlsonjok at 4:33 PM