I am.  The first Saturday of every month is the mini-card show up at Al's Sports Cards in Edmond. I was on the fence about going.  My birthday was last month and I have a little mad money from that.  But, December is a rough month (as you might imagine.)  Obviously, it is the gift giving season. But, it is also time for me to make quarterly insurance policy payments.  On the flip side, we just refinanced our mortgage to take advantage of the low rates, so we don't actually have a payment due to January.  I was leaning against going, since there is the larger bi-monthly OKC show in 2 weeks and I expect Roger Nuefeldt from Sports Memories of Oklahoma to be there.  He is the last local dealer of quality vintage I need to visit with in order to get my 1971 set over and done with.

Then Bill, the investment banker/card wheeler dealer from Wichita, called me this morning to say he was on his way in to the show and had some interesting new acquistions.

You know where this is going, right?   Right. 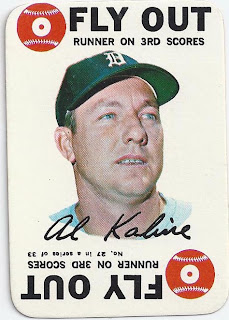 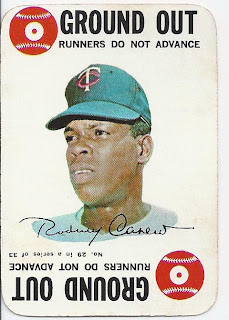 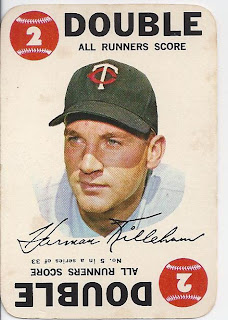 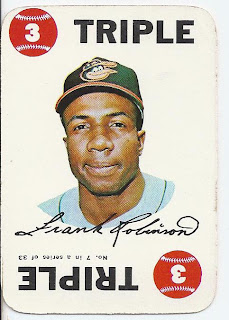 My intent was to only buy something if it was needed for my 1971 set, my several 1960sFleer sets, or my 1969 Topps Deckle Edge set.  It didn't work out that way.  I only need 3 Deckles to finish the set (4 if you count 22B, the Joe Foy short print), but there was no one selling singles. One dealer (For the Collector out of Tulsa, who made a recent appearance over at Napkin Doon's place,) had a complete deckle edge set, including the Foy, but was only selling them as a complete set.  So, I had to pass, but did pick these 1968 Topps Game insert cards for a buck apiece.  It is another small, fun, and cheap set at 33 cards that I will put together once I finish the Deckles.  Bill had the Aaron and Mays game cards, but I decided to hold off on getting them. 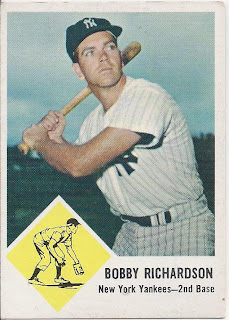 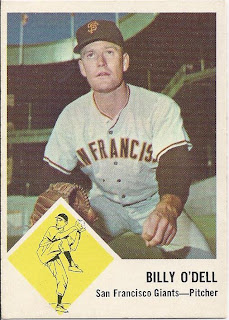 I picked up 2 more cards for my 1963 Fleer set, leaving me only 9 to go to finish.  I am glad to get the Richardson, since Chris Potter Sports is having a autograph signing with him in February.  Speaking of 1963 Fleer and autographs, after my whining yesterday about my Mazeroski and Gibson card getting lost in the mail, the Post Office managed to find and delivery them to the autograph service at the end of the day yesterday. I called to see if they got them in time to include them in the signing, but the person I spoke to on the phone couldn't answer the question. So, I am back to hopeful that I'll get those two signed.  I'll probably get all OCD on Monday and call them to see.

My status beyond that is I have two other cards out for signing, one today and one on December 16.  I have identified 3 more future signings and 2 addresses for TTM requests.  One of my TTM targets will be Don Demeter, who lives right here in OKC and is the pastor of a Baptist church.  If I do my math right, I have 8 1963 Fleer cards autographed and in my binder and 9 more in the works in the future.  There is a number of them on EBay too for $15 or less each that I may have to seriously target with my Christmas money from my parents. (Am I the only one that finds it weird that a grown-ass man with a good job is getting Christmas loot from his parents?)

And here is where I weakened. 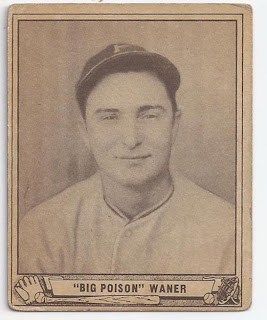 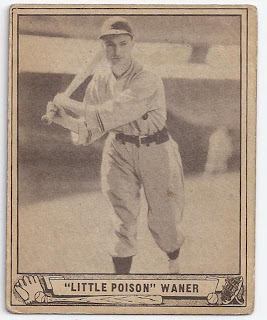 Bill had a huge stack of 1940 Play Ball cards that were neat to look at, but didn't really grab my fancy. Until I got to these two.  The Waner brothers were born not too far from here, in the town of Harrah, OK.  To come across pre-war vintage cards of two of the game's greatest, who also happen to be Oklahomans was too much for me to resist.  These are now the oldest cards in my collection, supplanting a 1948 Bowman Allie Reynolds (also an Oklahoman.)

Posted by carlsonjok at 3:02 PM