A while back I got a friend request on Facebook from a guy who went to the same high school I did.  I think he was a year or two ahead of me and his sister was in my class.  As I looked over his page, I realized that he organized sports figure autograph signings in Rochester and Minneapolis. I looked over his upcoming events and saw that Antonelli was going to be at one of them.  I had a couple Antonelli cards, but I quickly acquired a few more in better condition and sent them in. 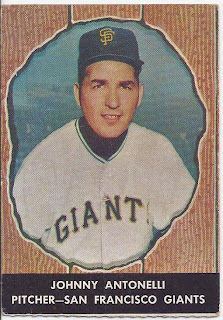 I don't think I actually have featured this card before. It is a 1955 Hires Root Beer card that was given away with the purchase of Hires pop.  Cards like this are reasonably affordable, but get more expensive if the tab is still attached (click here).  There are also what is known as test cards. I am not sure what the back story is with those, but will have to research it some day.  They are ungodly expensive.  There is an Antonelli test card at COMC, but I am pretty sure I don't want to drop $125 on one.
Posted by carlsonjok at 2:00 PM