Here is another of the few modern cards that made my 2012 favorite cards countdown. 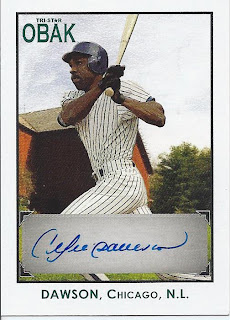 One of the low lights of my year was the discovery that Tristar was not going to issue an OBAK set for 2012. It's run ended after three years.  It was a fun set who's subjects always connected back to baseball even if they weren't even directly employed in the game. I pulled a lot of fun cards out of the several boxes of Obak I opened, but I suppose this 2010 Andre Dawson autographed card is the best of the bunch.
Posted by carlsonjok at 2:00 PM