Saved by the Mail, Part 1


I was a little grumpy today. You see, today was the big card show up in OKC that is held every other month. I wasn't planning on spending much today, what with it being the holiday season and what not. But, the news of my impending unemployment changed my plan. It isn't that getting laid off is going to be catastrophic. Between severance and savings, I have a cushion to fall back on while I look for something new.

Indeed, in these tough economic times, I consider myself downright fortunate to not be in desperate straits like so many others. But, it does seem prudent to cut back on unnecessary spending for a while. And, despite the passion we all put into this hobby, buying cards isn't a necessary thing. But, to prove I can be as shallow as the next person, I did pout because I couldn't go to the card show. But that frown turned upside down when I opened the mail box and found not one, but two trade packs waiting for me.

These trades were of completely different sizes, one involving three cards and the other involving 156, but I am quite happy with both. I'll look at the smaller of the two now, and hit the larger one tomorrow.

This first trade is with blog reader Kary, from the cheesiest state around, Wisconsin. I don't believe he has a blog, but I heard from him in response to my free card offer. I was able to help him knock off some of his 2011 Series 2 and Update want list. In exchange, he was able to send me 3 cards from my Update want list But, in addition to helping me with reducing my want list down to only 10 cards needed, the cards he sent were fantastic.

While I would agree that the Dee Gordon card is probably the nicest one in the series, these three also had fantastic photographs. In particular, I really like the Salas card. While it is a fairly simple shot, I think the framing was fantastic. This is the kind of picture I wish I could take at the ballpark. 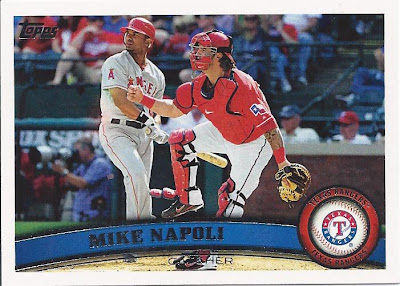 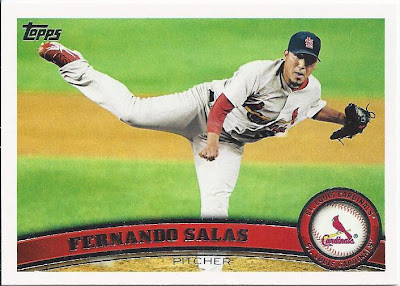 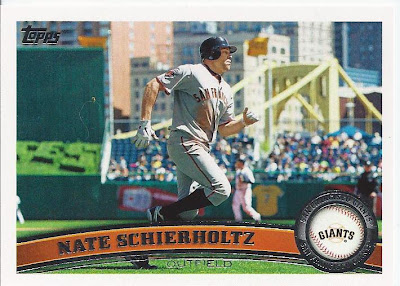 So, big thanks go out to Kary for cheering my up today. Not only did I get cards to help me complete a set, I got cards I can appreciate in their own right.
Posted by carlsonjok at 7:10 PM