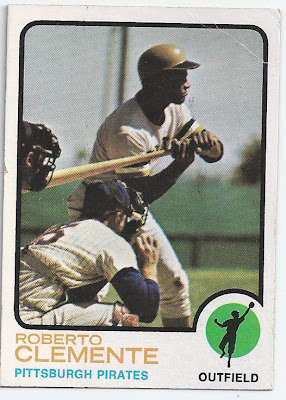 This was the second Clemente card from his playing days that I acquired. Interestingly enough, I bought the first playing-days Clemente on the same day and, believe it or not, it was also a 1973. I found a VG Clemente in a $2 box at a show and snapped it up. As I was doing my last circuit of the show, I stopped at another dealer who had a stack of vintage cards he was sorting through. As I was picking out a few cheap 1956s from him, I spied this Clemente. I added it to my stack of cards and he cut me a good price for them all. Since it was a bundled deal, I am not sure how much I actually spent, but it was probably in the $5 to $8 range.

The card, on first glance, looks fantastic. Upon closer look, though, there is a slight wrinkle on the upper right hand corner of the front. Without that, this would be a NM card. But, it is still a sharp looking card and it will be the cornerstone of my 1973 set, whenever I get around to starting it.

Coming up Tomorrow: The "after" picture of a pair of Number 1s.
Posted by carlsonjok at 3:00 PM