I've approached my set collecting in a haphazard manner. My intent, at the start, was to start with the main set I collected as a kid, 1978, and start working backwards. That didn't last long. As I neared the completion of 1978, I decided to skip forward to 1974. And it is from that 1974 set comes number 6 on my favorite cards of 2011. 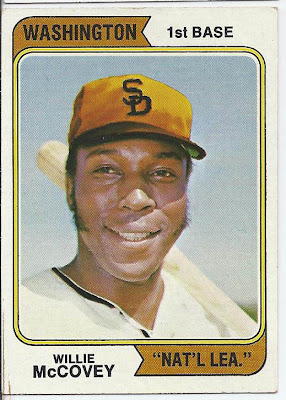 As a kid, my collecting wasn't very organized. I don't honestly remember how I acquired most of my cards and I tended to keep them all in a shoe box under my bed. I traded some and played a card tossing game we called Tops. But, there was no master goals. Completing a set never factored in. I was blissfully unaware of error and cards and variations. In short, I was a poor collector.

I am not sure if this led me to be a bit more obsessive as I re-entered collecting as an adult or not. But, suffice it to say, I am much more obsessive now. As I worked on 1974, I made the decision to put together the Traded set. Then, I figured I'd see about the Washington National League variations. Pretty soon, I was going after pretty much all the errors and variations. As it stands, I am one card short of a master set for 1974. There are three versions of card 599, which is an otherwise unremarkable Rookie Pitcher common card. There is a Washington Nat'l League variation, a large print San Diego version, and a small print San Diego version. I only lack the latter to complete a master set. But, for now, I have no intent of chasing it. The few I have seen on EBay have been selling for more than a NM Hank Aaron Home Run King card would sell for. Maybe some day, when I have some spare coin rattling around, I may get one. But, not for now.

In any case, I love this card because it is a Hall of Fame player and an interesting variation card. A brief description of how this variation came about can be found here.

Tomorrow: A card that has already appeared in a supporting role twice in this countdown.
Posted by carlsonjok at 3:00 PM