As I mentioned yesterday, this is the only 2011 card in my year-end countdown. It is also the only autographed card I pulled from a retail pack this year. 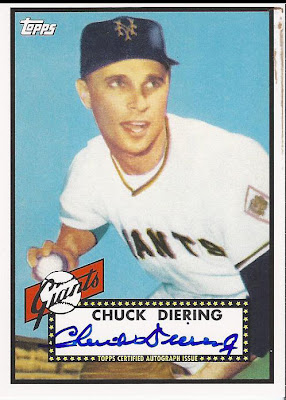 I bought a lot of retail this year. Indeed, with the exception of Heritage Minor League, I bought all of my 2011 cards retail. As such, I didn't get many hits. Not that I live for the hits, but they are nice to get every once in a while. Oh, I did manage to pull some relic cards this year, most of which I traded or sold on Ebay. As I have stated elsewhere, relics don't much interest me. But, I do like the autographs.

Indeed, as I evaluate my goals for next year, my intent is to limit the number of sets I do collect to Heritage only and stick with buying hobby instead of retail so I have a better chance of pulling some cool autographs.

Coming Tomorrow: A card from 1973 that should have ranked higher.
Posted by carlsonjok at 6:00 AM