So, having made progress on my first two goals, how did I do on my other two?

My third goal was to make some progress on my 1968 Topps Game card insert set.  On this goal, I failed. I did find a decent sized stack of them, but the only one that I needed that was not stained or beat up was Willie Mays.  I ended up not getting it, because I thought it would be expensive. However, after I got home, I looked it up and it only books at $15, so I probably could have gotten it for the cost of a McDonald's value meal lunch.  Clown move, bro.

Which leaves my last goal of a splurge purchase.  I had considered a 1951 Red Back Allie Reynolds, but the guy was asking $18 (90% of book) and the card wasn't in *that* great of shape. I also considered a Red Man Roy Campanella (no tab) but, again, the price wasn't anywhere near reasonable.  A 1934 Goudey Paul Waner was another possibility I considered and dropped. So,what did I end up getting?

Night Owl made a good guess. Anyone else figure it out? Well, find out after the jump: 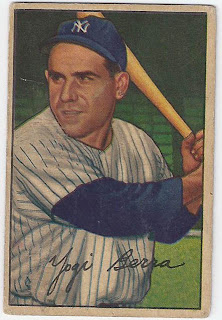 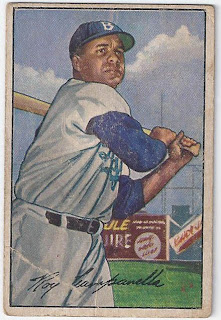 1952 Bowman cards of the two 1951 League MVPs!  They aren't flawless, to be sure.  The Berra has paper loss on the back and the Campanella has a big ole, visible crease in the lower left corner.  But, to get both at around 10% of book value?  Sign me up!  Even if it does mean delaying completion of my 1971 set for another month.

What I am listening to: Bittersweet by Big Head Todd & The Monsters (you have to just love a rock song with a steel guitar.)

Email ThisBlogThis!Share to TwitterShare to FacebookShare to Pinterest
Labels: 1952 Bowman