Fleer has a Flair 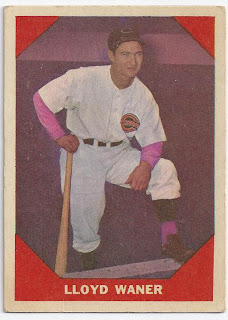 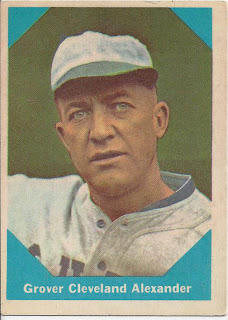 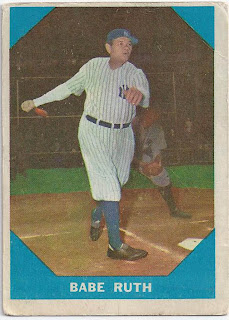 I have to say that this is an ugly little set.  It has a craft project feel to it.  I suspect that may have something to do with why it is (generally) so cheap to pick up.  All of the cards I got today, save The Bambino here, cost me a dollar each.  When I found the Babe Ruth card, I was a little nervous about asking how much it was.  It has a book value of $100.  Now, no one actually sells at book, but we all use it as a gauge of what pricing should be.  I was expecting an asking price in the $30-$40 range, but the dealer was only asking $15.  There is a surface wrinkle on the card in the upper right hand corner that was not visible when it was in the top loader.  Not visible in the top loader, not visible in the Ultrapro sheet, I always say.   Done deal.

At this point, I am right at halfway done with the 80 card 1960 set, with 3 more high value cards to go (Gehrig, Cobb, Williams.)  This isn't on my list of sets I want to finish this year, but it may be attainable. Commons are generally so cheap that, if I can get the three high value cards at a price similar to the Ruth card, I may be able to knock it off. 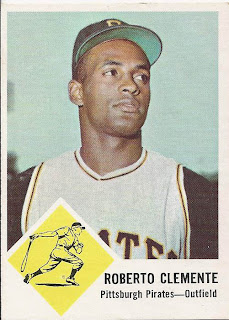 Wait, what?  Wasn't that supposed to be my splurge purchase?  Well, yes.  The 1963 Fleer Clemente has a book value of $200, so I would expect that an EX or better version would run more than $100.  This one, however, was way, way less than that.  While it has sharp corners and edges, and a clean glossy surface, the centering is way off and it was priced accordingly.  I am now down to needing only 4 cards to finish my 1963 Fleer set (five if you count the checklist.)  The only high value card among the four is Don Drysdale.  The checklist is actually the most expensive card in the set, at a $500 book value. It is so high because of the general problem of finding unchecked checklists and because this card was short printed (along with the Joe Adcock card.)

The one premier seller at the show actually did have a checklist priced at $50, but it had check marks on it and was only in G condition. I had considered it for my splurge purchase, but decided against it.  I really cannot decide what to do about the checklist.  As a set collector, I want the complete set, including checklists.  But, I have been slowly building this set with EX or better cards, and have no intent of spending the dinero needed to get a clean checklist in that condition.  In the price range that I would be looking at, the cards would not be of particularly good quality. So, in the end, while I may keep my eye out for a clean card at bargain prices, I am not particularly concerned about adding the checklist to my set.

Anyhoo, if Clemente didn't turn out to be my wild and crazy pickup, and it wasn't the Fleer checklist, what was it?

What I am listening to: I Ain't Back No More by John Hiatt.