I found the last card I needed to complete 2010 Obak as BIN on Ebay. 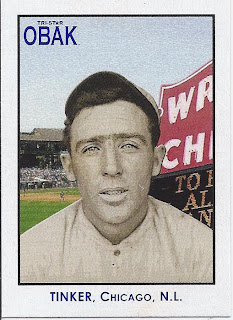 It was about $5 delivered, which seems high, but it was a short print.

And the last card I needed to complete the set.

At some point, I may chase the box topper cabinet cards, but they come up so rarely and at such a price ($10-$15 each, if memory serves) that I may just let them go.

Obak was a fun set to build and I will probably keep an eye on finishing 2009 and 2011 in the next year.

True fact:  Joe Tinker only played two games at Wrigley Field in his career. The Cubs started playing at Wrigley in 1916, the last year of Tinker's career.
Posted by carlsonjok at 6:40 PM