I was cleaning out my desk and came across a $25 gift card we got from the bank when we refinanced our mortgage late last year.  I probably should have used it for groceries or given it to my wife.  But, I bought cards.  Specifically, I used some of the money to complete two insert sets from 2004 Fleer Greats of the Game 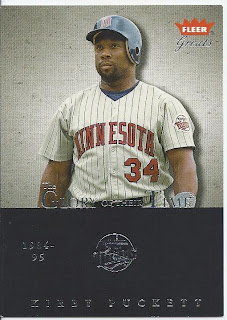 This was the last card I needed for the 35 card Glory of Their Time insert. 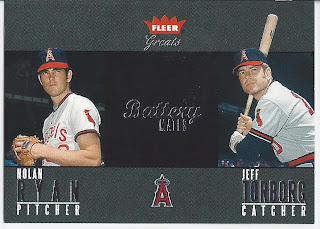 And this was the last card I needed to complete the 10 card Battery Mates insert.

I am (sorta) closing in on completing the 2004 Greats set.  It depends on where I decide to call it complete.  At a minimum, I have 11 cards to go to finish the 29 card Forever insert set.  I could call it done there and be relatively happy.  There is also a 10 card Announcing Greats insert set, of which I don't have any.  I do see 6 of the 10 on EBay and I think I'll probably start picking them up, if the price is right.

The real question remains what to do about the Blue parallels (numbered to 500 for the first series and numbered to 75 for the second) and the autograph cards.  I actually have 31 blue parallels (out of 145) and 22 of the autographed cards (out of 109).  I am thinking at this point to not bother with the blue parallels, especially since they are fairly pricey given the low print run on the second series.  I am likely to occasionally pick up some of the autographed cards, but probably won't try and complete it. With names like Yogi Berra, Duke Snider, and Stan Musial, I don't harbor any illusions that I will ever be willing to plunk down the cash to make a run at it.

Coming up:  A couple of unsolicited trade packs arrive.

What I am listening to: "You'll Never Leave Harlan Alive" by Patty Loveless

Posted by carlsonjok at 5:39 PM