It is almost 11 PM and I just got home. My wife and I had tickets to the OKC Thunder - Utah Jazz game. Had a great time and left a few minutes into the fourth quarter with the Thunder up by 25.  I drove home as fast as I safely could because I knew there was a return package from the most recent Chris Potter Sports autograph signing waiting for me.

I had sent 3 cards in back in January and they were back in my possession....or so I thought.  I had a mild heart attack when I tore open the bubble mailer and saw one card and two empty top loaders fall out.  After recovering my composure, I examined the other contents to find a slip explaining that two of the the signings I had sent in for had been postponed to part of the next signing and would be returned to me at the end of June.  So, 66 2/3% of my excitement has been postponed three months.

So, what card did I get back? 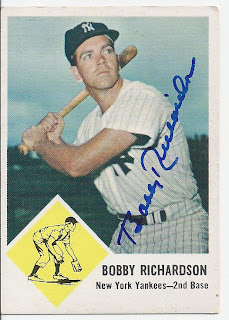 This is the 17th of my 1963 Fleer cards that I now have autographed. One of the postponed cards I had sent in was also a 1963 Fleer, Vern Law.

After a bit of a lull, the last few months, my quest to get as many '63 Fleer cards signed as possible is starting to ramp up again. In addition to having Law out, I sent three more cards out for signing earlier this week.  And I have identified six more opportunities over the next few months.  So, hopefully, by July my count of autographed 1963 Fleer cards will be up to 27. Not bad for a 66 card set.

Oh, the second card that was delayed from this signing to the next?  The iconic 1976 Topps Traded Oscar Gamble.  I was hoping to show it off to Night Owl, who has declared that he is tired of that card.  Maybe he will be back in love with it when I get it back in July.

What I am listening to: Signed, Sealed, Delivered by Stevie Wonder

Posted by carlsonjok at 9:10 PM