Now that my entry in Thorzul's Nightmare on Cardboard contest has been revealed, I thought I would do a few posts on how I created it.

I don't rightly recall why I chose the Creature From the Black Lagoon for my subject matter. I'm not up on any of the current monster movie villians. The last horror movie I saw was "The Blair Witch Project." And, even then, it was probably at least 15 years since the previous time I saw a horror movie. I don't see a lot of movies, but when I do it is either a screwball comedy or a Coen Brothers movie. Everything else, for the most part, doesn't get me into the theater.

So, let's talk a bit about how I saw The Creature on a baseball card. 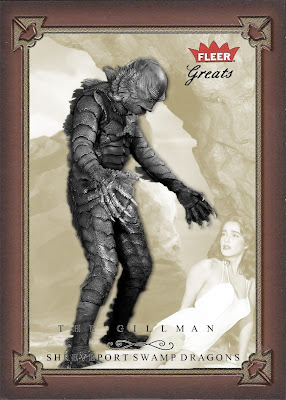 First off, in the movie credits, the character name is The Gill Man, not any of the various permutations of The Creature. So that was easy enough. As far as choosing a team name, I had a recollection of a minor league team with the word Swamp in it's team name, so I googled it up and, viola, the Shreveport Swamp Dragons. Also easy. 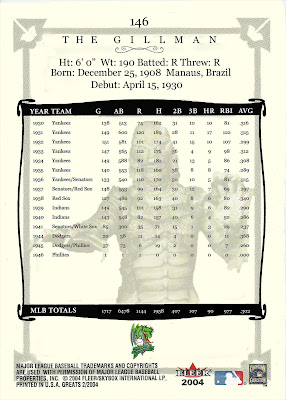 The information on the back is a little more obscure in it's origin. As I was looking at the IMDB entry for The Creature From the Black Lagoon, I noticed that there was two different actors that played The Gill Man. Ricou Browning did the underwater scenes and Ben Chapman played in the land scenes. As it happens, there was a major league baseball player also named Ben Chapman. So, I used his vitals and major league statistics. The only thing I changed was the birthplace. I figured it would stretch the limits of credibility that The Gill Man would be born in Nashville, Tennessee. So, since the movie was supposedly set along the Amazon River, I chose a city that was along the river. So, there it is. Not an overly complex explanation, but now you know what I was thinking.

In my next post about this card, which I will probably post tonight, I'll walk those of you who are interested through the process of creating this card. It will probably be a fairly long post and only of interest to Photoshop geeks, but I had so much fun with this, I figured I'd immortalize the process, so I can reference it next year when I may try a Killer Klowns from Outer Space theme.
Posted by carlsonjok at 7:00 AM

Email ThisBlogThis!Share to TwitterShare to FacebookShare to Pinterest
Labels: Greats of the Game, Off topic, WTF