As I approach my first year back into collecting, I am starting to look back and evaluate what the year was like and how I intend to focus going forward. One obvious change I am going to make is to spend less on modern cards. I bought a lot of Series 1 and 2. And I bought retail, so I ended up with a huge amount of duplicates. And enough rings on the Diamond Giveaway site to get the 60th Anniversary commemorative set. As it stands now, I am probably not going to buy any of Topps flagship next year. Putting the set together just didn't excite me the way the vintage sets did.

So, imagine my disappointment, while waiting for my special set to arrive, when I found out it was basically just a Series 1 and 2 set with an additional foil stamp on it that denotes it was the commemorative set. When it finally arrived, I didn't even open the box, but prepared to sell it off on EBay. The sets had been selling for between $30 and $40. Not a great pay day and certainly not enough to recoup all I spent on rack packs at Target. But, enough to make it worth my while to get rid of it.

Without going into too much tangential detail, I received a trade offer for it over at the Blowout Cards forum. Without any back and forth (the other person basically accepted my first proposal) we settled on a deal. In exchange for this set, I recieved 4 cards towards my 1971 set building effort. And what cards they were! 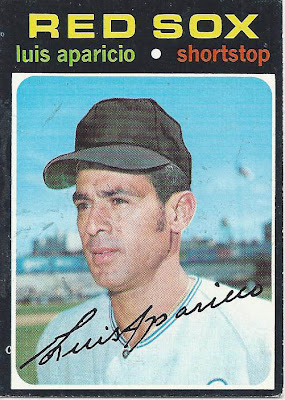 This Luis Aparacio is in pretty great condition overall. Plus it is card 740, which means it is part of the rare high number series. 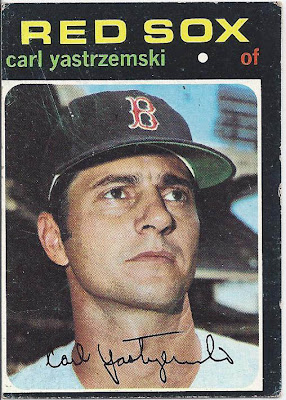 This card was not part of my original trade proposal, but the other guy threw it in since it wasn't in stellar shape. In all honesty, it looked worse in the scan than it does in person. I normally wouldn't buy this card on my own. I am not obsessive about centering, but this card is too far off and would have been one I passed over. Indeed, I did. But given that it was a freebie, I am tickled to have it. 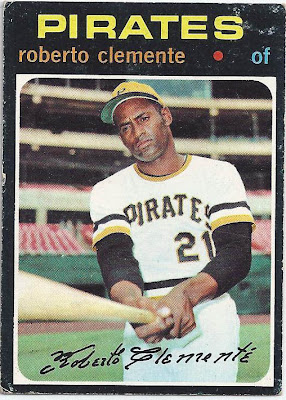 What can I say? One of the greatest players of all time. The corners are soft and the face shows the chipping/marring typical of 1971 cards. But, given the that it is Clemente AND part of the high number series, it is probably about the same quality I would have bought on my own anyways. 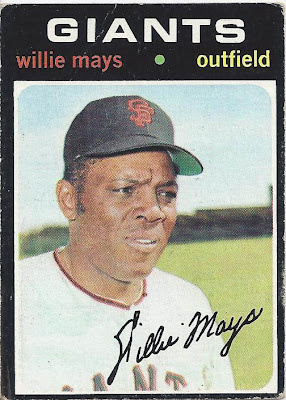 Ahhhh! The greatest player of all time. Similar to Clemente, this isn't a pristine version of the card. But it is right around the quality I would buy for myself.

So there it is, I traded off the Topps commemorative set and, in exchange, got 4 cards with a total book value of $310. Even given the quality of these cards, I figure they would have costed me around $50 to $75 to buy on my own. So I feel like I got a great deal. Of course, given how quickly my trading partner accepted my offer, I have to assume he was pretty happy with it too. And that is, after all, what trading is about.
Posted by carlsonjok at 3:00 PM