When I started collecting almost a year ago, and decided I was a set collector, I felt a methodical approach was the best. Work one set at a time, start to finish, then move on to the next.

But then I started the whole new collector routine and started buying stuff willy nilly to see what was out there and to see what I like. Somewhere along the line, things got out of control. I now have 7 sets in the works:

So, given this mess, what is the logical thing to do? Surely not start another set. Yeah, I am starting another set.

My goals for next year are not to bother with any other modern set, except Heritage. (Let's see how well that works out.) And with all of the time and money I don't spend chasing a bunch of sets I am generally ambivalent about, I figure I can go back and work on the older Heritage sets. With that in mind, I saw a lot of nearly 200 2001 Heritage on EBay and decided to bid on it. I ended up winning with a bid of $35. This was more than I intended to pay, but I got all excited like Jo Jo, the Indian Circus Boy with a pretty new pet (Tommy Boy reference) and upped my bid. So, it arrived earlier this week and yesterday I started a binder for it. 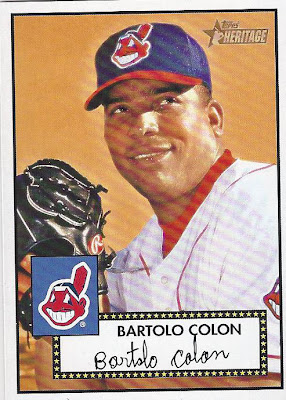 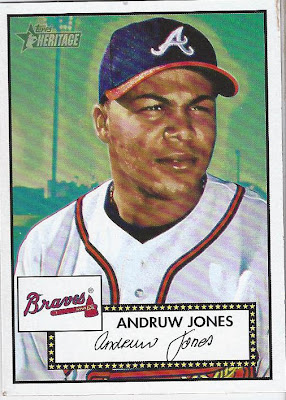 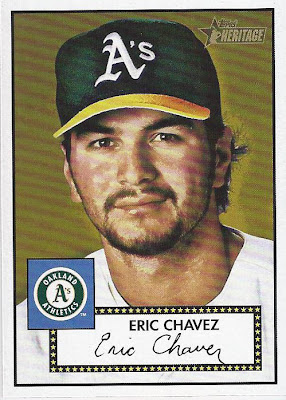 Here we have a trio of pickups off the scrap heap for the 2011 Yankees. Though he faded at the end of the year, Bartolo Colon was bad-ass in the first half of the season and, along with Freddy Garcia, shored up what was expected to be a highly suspect rotation. Jones and Chavez were good role players this year. Jones as a sure handed backup outfielder and platoon DH. Chavez as a backup infielder, who played well enough during A-Rod's time on the DL to keep the Yankees in contention. 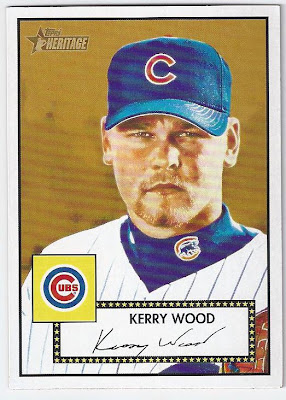 A late season pickup for the Yankees in 2010. He was stinking up the joint in Cleveland, but came in and was a spectacular 8th inning guy through the remainder of the season. 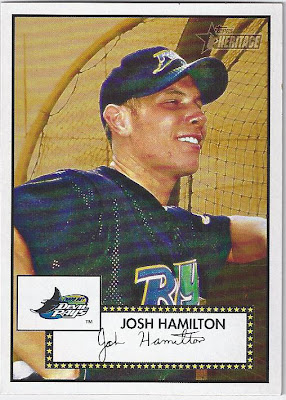 Interestingly, Hamilton was still 6 years away from his major league debut when this card first appeared. 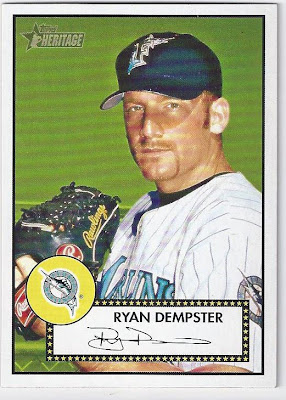 I read yesterday that Dempster exercised his $14M contract option for 2012 with the Cubs. Given his rather pedestrian performance this year, that has to be one of the least surprising news items this off-season. 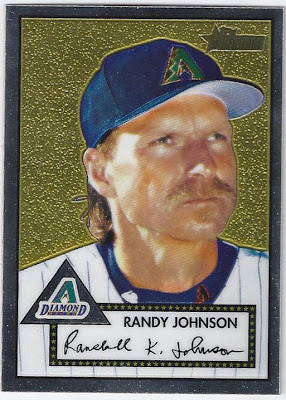 This was included in the box, a Heritage Chrome Randy Johnson. The Baseball Card God (hallowed be thy name!) has chosen to smile on me. One of these just sold on EBay for $20. And that is exactly where this one is going. So, even though I overpaid for the lot of cards, I'll end up cutting my cost down significantly.
Posted by carlsonjok at 4:40 AM

Email ThisBlogThis!Share to TwitterShare to FacebookShare to Pinterest
Labels: 2001 Heritage