Yesterday was a good day! I was contacted about two job interviews. The first is a lunch interview this coming Monday with the CFO of the company I interviewed at last Friday. The second will be Tuesday morning at a local manufacturing site of a Fortune 50 corporation. But, even better, I got to go to the Oklahoma Redhawks home opener.

I had that going for me. Which is nice. 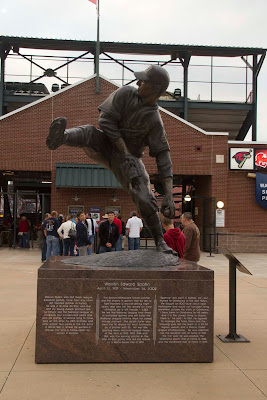 A statue of an Oklahoma adopted son, Warren Spahn. Those of you who read the Cardboard Junkie will recognize that he showed a photo of a similar statue at Turner Field the other day. 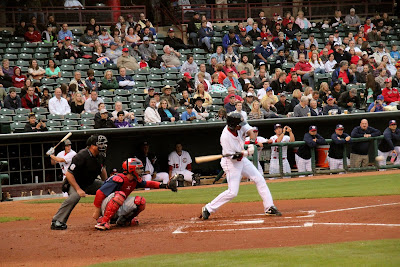 I didn't get many action shots. It was a cloudy evening and despite cranking up the ISO, I still wasn't able to get a fast enough shutter speed for decent action shots. I'd love to get one of those large aperture professional lenses, but they are way too expensive ($5000 and up), so I'll just have to live with what I have. 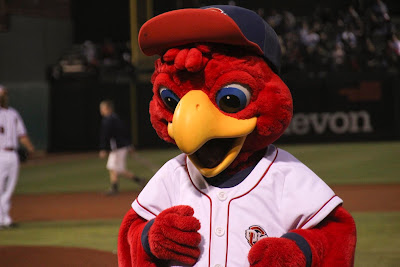 Cooper, one of the two mascots, the other being Ruby, a distaff version of Cooper. There is a little upset here in OKC. Yesterday, the Redhawks, owned by Mandalay Sports, announced that they awarded the naming rights to the stadium (built by the taxpayers and owned by the city) to Newcastle Casino. Most of the upset is that it was named after Newcastle, which is a backwater of a town within commuter distance of OKC. But, there is another dimension of this that my wife pointed out. Last year, Mandalay retired the previous mascot, Rowdy, in favor of Cooper and Ruby, which they felt were more family friendly. And what do they do to maintain the family atmosphere? That's right name the stadium after a casino. *eye roll*

Now, I couldn't really care less. I have no place in my life for moral scolds. If the city politicos are upset about this development then they probably never should have given the team the ability to sell the naming rights. And, frankly, I also remember when the stadium opened in 1997. Everyone was upset because the team had sold the naming rights to the ballbark to Southwestern Bell (now AT&T). But, no one ever called it the Southwestern Bell Ballpark at Bricktown. It was always The Bricktown Ballpark. It won't be any different now. All the folks that are strutting around in high dudgeon will get over this and move on to something else to be offended at.

Now this being minor league baseball, there was, of course, cheesy entertainment. Including baby races. They dress up toddlers as jungle animals and set them down on a mat with race lanes on it and then........pretty much nothing except cute overload. 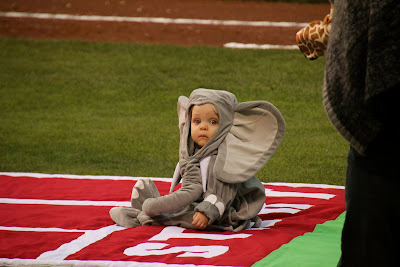 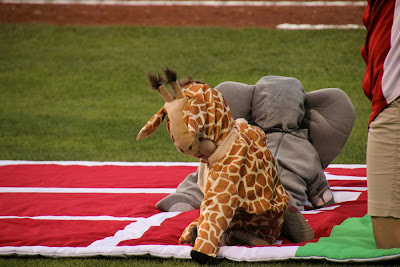 Giraffe played with the grass. 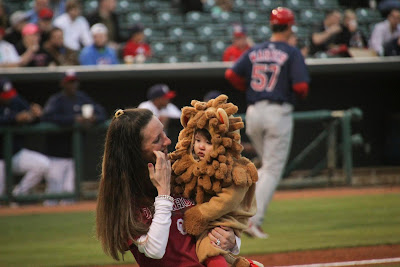 So, by virtue of actually moving, Lion was our winner. 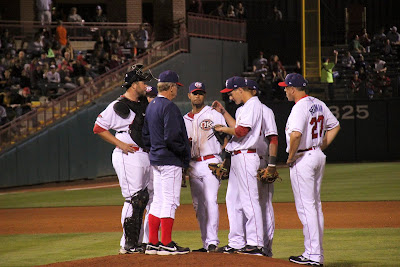 I think they are taking the curse of his glove. 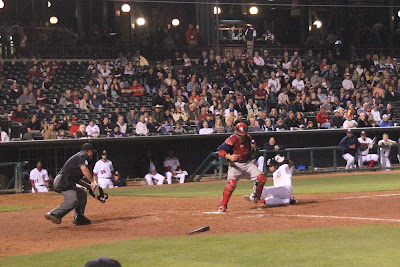 Force play at the plate. The Redbirds backstop actually did a good job of snagging a high throw and getting back down on the plate for the out.
Posted by carlsonjok at 8:00 AM