Let me start my explanation with a premise, which is this: People want to belong to a group. Groups, or communities, can take many forms. They can be people who live in a common geography, work together, hold common beliefs, or share a common interest. My life, as much by circumstance than choice, has a shortage of what I would call community.

I was once a pretty avid bicyclist, belonging to an excellent local riding club and making many friends there. But, almost nine years ago, my wife and I bought a run down horse farm. Along with the tasks associated with making the 12 acres habitable for man and beast came an eternity of chores. To paraphrase cowboy poet Baxter Black, brush always is growing and, thus, always needs to be cleared. I have done almost no cycling since we moved out here. There is always something else that needs to be done. Many of those friendships have withered.

At the start, I was still part of a team at work. My daily commute was long, but it was satisfying to come together with a group for a common purpose. But, that too changed. The plant was sold and the production was outsourced. I always landed on my feet with regard to a job, even as the number of employees dwindled from over four thousand to under forty. But, the work changed and, in time, I no longer worked with anyone here in Oklahoma. Indeed, most of my coworkers were in different time zones. The 45 mile commute became onerous, and I increasingly began working from home. First, it was just Friday. Then Monday and, finally, I gave up my office and worked from home every day. Now, my only companions are the various cats, dogs, and horses here on my farm.

So, you may be wondering, what does this confessional have to do with baseball cards? Let me tell you. While I enjoy collecting in and of itself, I am surprised and immensely gratified that I have found something of a sense of community here. While I will grant it is a virtual community and it is unlikely I will meet any of you anytime soon, if ever. It seems a community nonetheless. I have found people willing to give their time and resources to help a new collector find his feet in the hobby. Complete strangers will send me large numbers of cards to help me along. Numbers that far outstrip what meager pickings I sent their way in the other side of the trade. Indeed, of all the trades I have worked out in the last few months, I cannot think of a single one that was equitable for my trading partner. I have, without exception, gotten more back than I ever sent in exchange. Sometimes significantly so.

A recent trade with Ted over at Crinkly Wrappers is a good example. I didn't write down what I sent to him, but it was in the neighborhood of 5 cards off his 2011 Heritage want list and, perhaps a small handful of other cards and inserts. What I got in return was a stack of over 80 of his duplicates from Heritage that cut down my want list significantly. I was bowled over by his generosity and, indeed, the generosity of all of the people I have traded with. Every last one of you.

It was so overwhelming that I felt compelled to take down my want list until such time as I could sort through everything that was sent and update it properly. Indeed my want list was reduced to the point that I only need 11 of the non-short print base cards. So, with further emoting, here is a small sample of what I got. 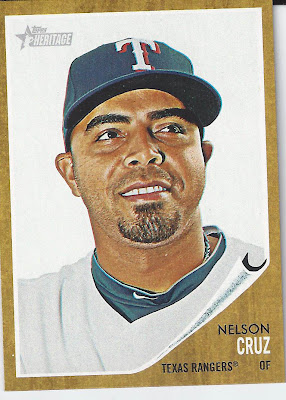 Ranger Nelson Cruz, who I have previously written about here. 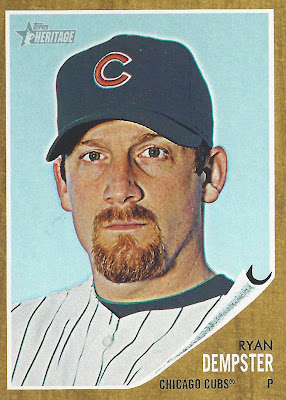 Ryan Dempster, who does a hilarious Harry Caray impression. And a bunch of big names, a few of which are: 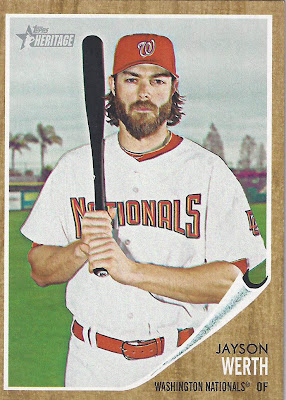 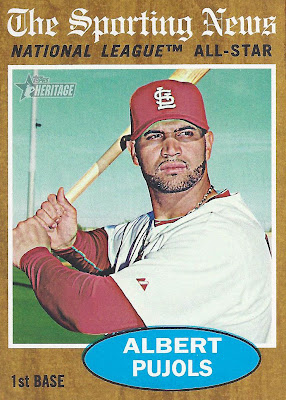 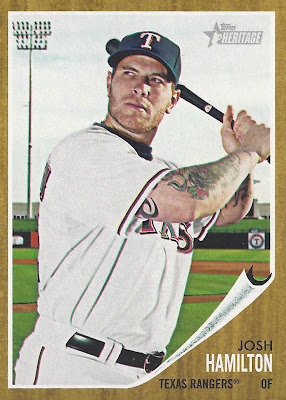 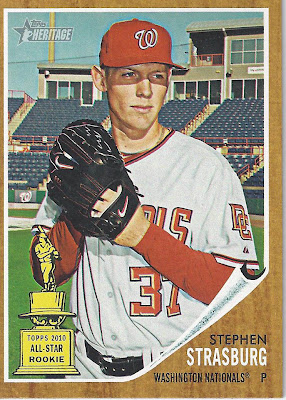 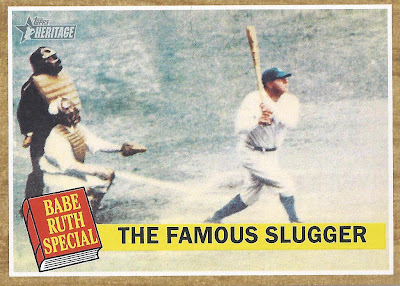 So, there it is. A very small sample of what Ted sent. I wonder if this is what is known as an "embarrassment of riches?" In any case, I owe Ted something nice. Since he is a Blue Jays fan, I have set aside a 2011 Heritage Chrome Travis Snider. But, I think I also need to look for something cool at the next local show.
Posted by carlsonjok at 5:00 AM