It has been a while since I added any cards to my Paul Blair player collection, but I managed to score five rare cards on EBay for reasonable cost. I've received four so far. 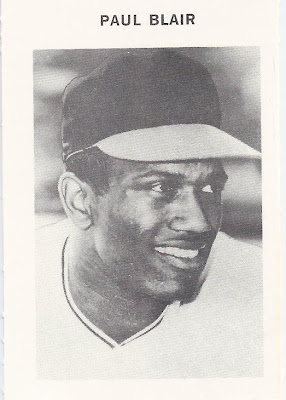 A 1969 Milton Bradley card. I believe this was part of a (two) dice game, since there are different batting outcomes on the back numbered from 2 to 12. I'll have to look it up sometime. Given that it is part of a game, I have to say this card is in really good condition. It isn't visible in the image, but the perforation tabs are still there.

The picture appears to be the same one used as a model for the 1971 Carl Aldana card which I wrote about here. The two cards are actually right next to each other in my binder. 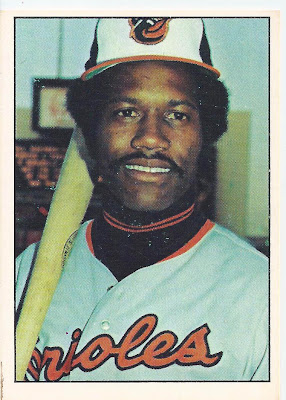 This is a 1975 SSPC card. Don't know anything about the set, but I'll add it to the always growing list of things to look into.......some day. 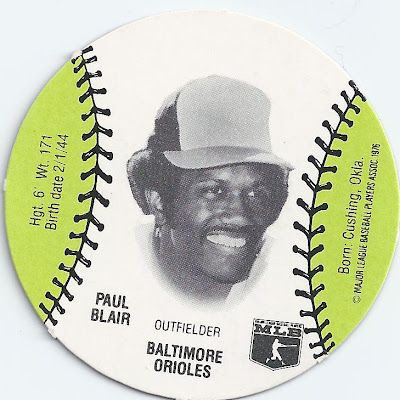 1977 Burger Chef disk. It has a cartoon of Fangburger's daughter on the back, which I didn't scan.

1993 Upper Deck Baseball Assistance Team card. This one isn't going to fit into a standard 9 pocket Ultra-Pro sheet. I need to probably look for something different because this is the second card I have that won't fit.

So there it is. I still have one card left to receive: an autographed 1970s Yankee Greats Wiz card. The Wiz was a NYC based electronics chain that was a Yankee's sponsor. There are, I think, two different Wiz Paul Blair cards: the 70s version seen above and an 80s version also. I swear I have seen an 80s version, although it seems a bit odd. It was a bit of a stretch to describe Blair as a Yankees great as he was mainly a platoon player and late inning defensive replacement in the 1970s. The 80s is even more so, since the extent of his entire 1980s career was 12 appearances and two at bats (with no hits). He did do some coaching for the Yankees organization after retiring. So, I guess I'll just keep an eye out for it.
Posted by carlsonjok at 4:52 PM