Just a quick hit today. I still have those two big trade posts to do. I've got them outlined, but I need to fire up Photoshop to cut up the card scans and actually compose the text. I wasn't planning to do a post on this new arrival. It is just one of the final cards I need to complete my 1974 set. But, when I looked at it I saw something interesting, See if you can catch it. 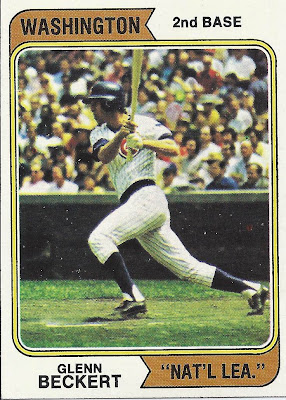 Did you see that? If so, good for you. If not, maybe the back will yield a hint. 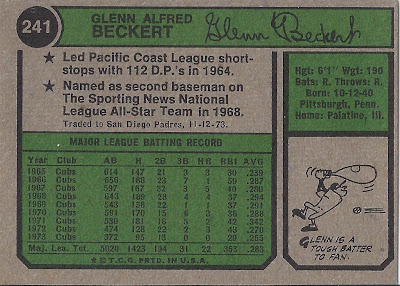 See that line in small print that reads "Traded to San Diego Padres, 11-12-73.*" Glenn was traded from the Cubs to the Padres early enough that Topps was able to put him on the correct team for the base set rather than adding him to the later Traded mini-set.

Got it? Now let's look at the front again.

See it now? Topps did not airbrush him into his new uniform. He is still clearly kitted out as a Cubbie. Maybe you are laughing at me for my (not so) startling discovery, but I never noticed this before on the San Diego version of this card.

* A marginally interesting additional note: We can pinpoint down when Topps went to press with the base set in 1974. The 44 card Traded mini-set includes the date that the trade featured was made. Most of the trades featured in the Traded set were dated in the first week of December. The earliest trade featured, however, was Larry Gura being sent from the Cubs to the Rangers as the player to be named later from the earlier deal that sent Mike Paul from Texas to Chicago. The Larry Gura Traded card was dated November 13, the day after the Beckert deal. So, it would seem Topps went to press late on November 12 or early on November 13.
Posted by carlsonjok at 2:00 PM