So, with the new job, and the associated commute, I haven't settled into a schedule that allows me much time for blog reading and writing, so this will be a quick and dirty post. Sorta quick anyways. I scanned the cards on Monday, cropped down to individual cards and uploaded the images on Tuesday, and I am writing this on Wednesday. I think I am going to have to plan further ahead and utilize the weekend better if I want to produce more than a post or two a week.

Anyhoo, over the last couple weeks, I've added a few more cards to my Paul Blair and Johnny Antonelli player collections. As you will see, the definition of cards may be stretched a little, but they are all still flat paper items, so it is good enough for me. 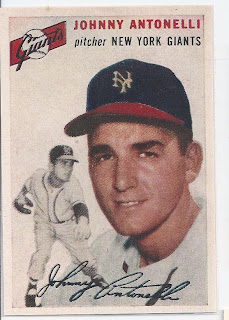 This looks like a typical 1954 card, but it is actually a 1954 Sports Illustrated/Topps sample card. It is pretty much identical to a 1954 Topps card, except that it is printed on magazine stock. 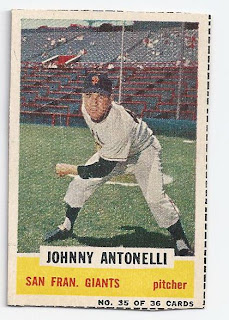 A 1960 Bazooka Johnny Antonelli. There isn't anything on the back and you can see that whoever cut this card from the box didn't get it perfectly straight. But, I have never seen one of these come up for sale before, and it is in great condition otherwise, so I jumped at the chance to get it. 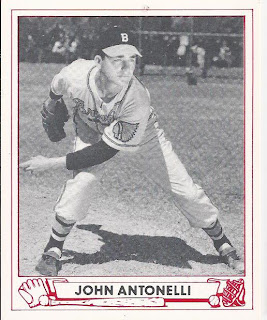 This is a 1985 reprint of the 1949 Play Ball set. Well, I think it is a reprint. I've never seen a '49 Play Ball Antonelli and haven't been able to track down a set checklist (although I haven't tried very hard either.) So, I have no idea if he is in the original set. 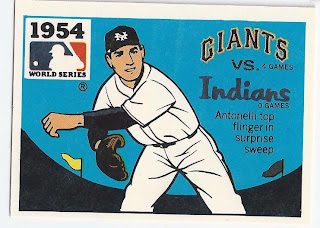 A 1980 Fleer World Series card commemorating the 1954 World Series. This 1980 set was a throwback to a similar set that Fleer did in 1968. I have the 1968 card and thought I had shown it, but I can't find it anywhere on the blog. Suffice it to say, the player graphic is the same on the two cards, but the rest of the front is different. The backs are completely different, with the 1968 Fleer issue having a paragraph of text describing the 1954 World Series, while the 1980 set has a team name and hat graphic sticker on the back.  I prefer the 68 card, but when you are player collecting you gotta get 'em all, so here it is.   I am assuming there is a back story to both sets, but I have to get showered and feed the horses before I head out the door, so I'll have to save that for another day. 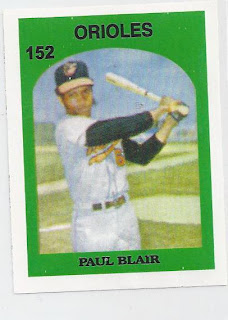 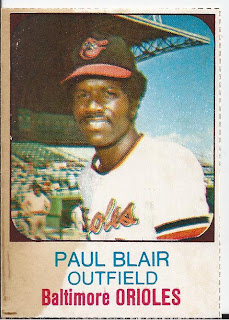 A 1975 Hostess Paul Blair. This card is in super condition. It is really rare to find the Twinkie stain still intact. 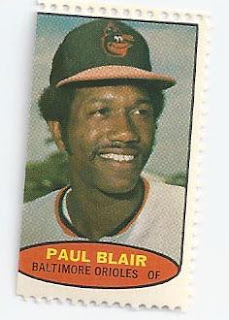 This is a 1974 Topps Stamp, obviously miscut. But it is the first I have seen come up for sale, so it was well worth the dollar it cost me. It is about the same size as a regular postage stamp. 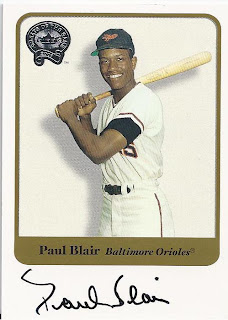 Finally, a 2001 Fleer Greats of the Game Auto card. I think I showed another autographed 2001 GOTG Blair a couple weeks back. However, that one was the blue border base card and the auto was added later. This was the actual set issued auto card. I can't believe it has taken me this long to get this card. They are always coming up on EBay, but for some reason I've never pulled the trigger.

Coming up sometime in the future: another foray into Obak.
Posted by carlsonjok at 4:00 AM