It is coming up pretty quick on a month since I was notified that I would be laid off at the end of January. I swore off any unnecessary spending in order to be ready in case my time off was significant. And that includes cards. While I am, thankfully, situated for a lengthy unemployment, I am hoping it won't be. I have some inside information that I should be contacted for some interviews next week. But, I am sticking by my decision to not buy any cards until I have a job offer in hand.........sort of.....

I was out yesterday running errands. One of which is looking for birthday gifts for my wife. There is one specific item that I am looking for that I have been unable to find. While driving home yesterday, I stopped at a flea market at the Cleveland County Fairgrounds to see if anyone there might have it. Long shot, I know, but I was desperate.

Well, let me tell you, this flea market is one that all the classier fleas avoid. I was amazed at what some people are trying to sell. Need a box of old phone and coaxial cables? Want to stock up on VHS cassettes or old cross-stitch magazines? This is your place. Need any interesting antiques or useful items? Don't even bother.
There was one guy, though, selling sports memorabilia, including cards. Most of it was unwrapped boxes of junk wax, but he did have some individual cards for sale. I went through the box and managed to find 3 insert cards from the 2004 Fleer Greats of the Game set I am trying to complete. 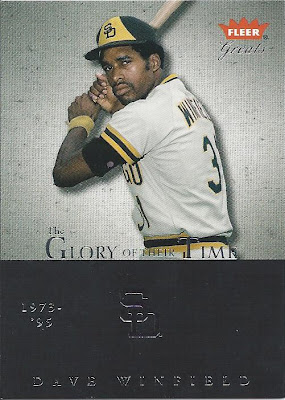 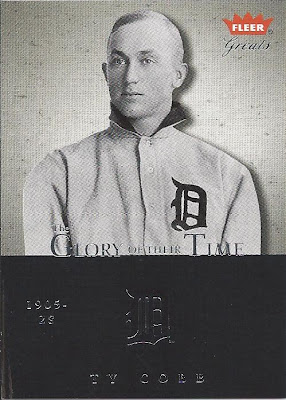 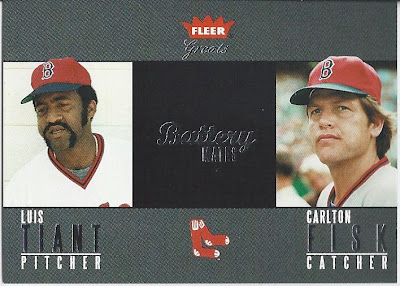 I paid $4 dollars total for the 3 cards, which is about $1 more than I would have paid getting them from COMC. But, obviously, I didn't have to pay shipping, so I came out ahead. As it turns out, I already had the Winfield, but even at $4 for the two cards I needed, I still did alright. The guy also had a couple of the blue bordered serial numbered parallels, but I passed over those for now. I also noticed that he had one of those flat locking cabinets that card sellers had. Inside was the 27 card Willie Mays reprint set that was printed somewhere around 1996. I didn't ask him what he wanted for that since I was guessing that they weren't really worth all that much and the segregation of those cards behind a locked cabinet, and in lucite card holders, indicated he valued them way more than the market did.

So, now I will go back to not buying cards.
Posted by carlsonjok at 6:00 AM