Do I Want to Trade? 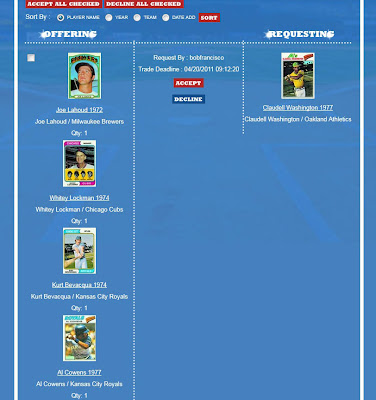 Someone must need that Claudell Washington to complete a set. I was planning on holding onto Washington, because once I finish 1974, 1977 is next. However, this trade offer also included a 1972, which I plan to put together further down the road. I didn't need the two 1974's included in this offer, but I can use them in future trades.

Added bonus: I have two trades with readers in the works. Both are real blockbusters for me. Since I am (supposed to be) on the clock, I'll defer talking about them until the deals actually go down.
Posted by carlsonjok at 6:34 AM