What started off as a crappy week seems to be getting a little better. I got another trade offer on the Topps Diamond Giveaway site that I jumped on. 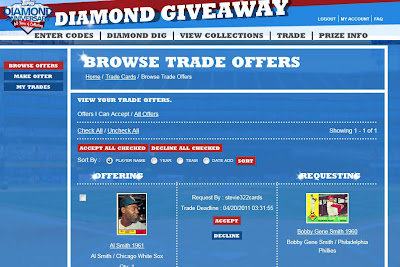 Strictly speaking this may have been an odd trade to accept. I traded an older card for a newer one and the 1960 Bobby Gene Smith has a high book value than the 1961 Al Smith. But, I thought it was a great trade. Al Smith had a much better career, playing for 12 years (including 10 as a starting outfielder for Cleveland and the White Sox) and making two All-Star appearances. Bobby Smith was backup outfielder for five different teams over the course of seven seasons. I think, though, the thing I like best about Al Smith is that he started out playing in the Negro Leagues. That makes this card a nice companion to the 1958 Jim Pendleton I recieve through the Million Card Giveaway.
Posted by carlsonjok at 4:16 AM