God As My Witness, I Thought Turkeys Could Fly From the annals of odd minor league baseball game promotions, I give you: Chewbacca Night (May 1, 2010 - Oklahoma Redhawks vs. New Orleans Zephyrs). Okay it was actually Star Wars Night and you had the opportunity to meet Chewbacca, but it sounds more "minor league promotions" my way. So sue me.

Marketing isn't my thing. I am, by training, an engineer. I have an MBA, but marketing wasn't my strong subject. I just never got it. But, sometimes I wish I could sit in on marketing meetings. More specifically, I wish I could have sat in on the marketing meeting for the Oklahoma Redhawks when they decided to have a Star Wars Night. I have to presume it was a joint promotion with a local Science Fiction club. The night featured an appearance by Peter Mayhew, the actor who played Chewbacca in the Star Wars films. We missed the autograph signing, but did get to seem him throw out the first pitch. Additionally, the night also featured members of the (presumed) Sci-Fi club appearing in costume. Here are a few highlights from the night.

An appearance by Darth Vader. In the first picture, he is walking down the stairs into the box seats directly behind home plate. I imagine him saying, in his best Bob Uecker voice, "I must be in the front row!" 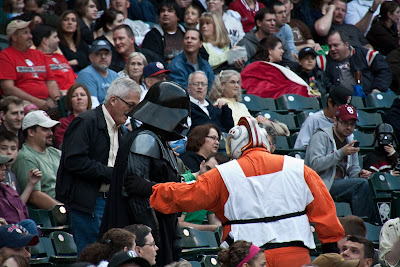 Though I am a little confused why he was being escorted by a Rebel X-wing pilot. (On a tangentially related note, is it just me or does the guy in the rebel flight suit bear a striking resemblance to the actual character in the movie?" 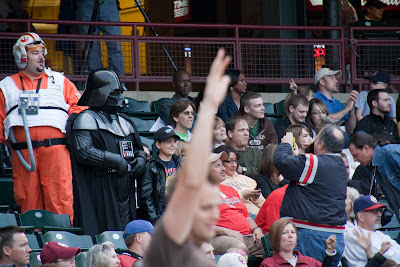 I am not a huge Star Wars fan. In fact, it was well over a year after it's theatrical release before I finally saw the original movie. My wife, on the other hand....HUGE fan (that is her Chewbacca trading card up above). So, I may be wrong here, but I though that Imperial storm troopers were clones and, thus, were all supposed be identical. You wouldn't know from these two fellows, who seem to be of slightly different size and shape. 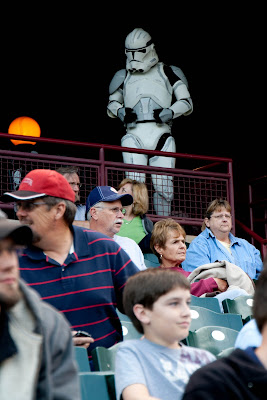 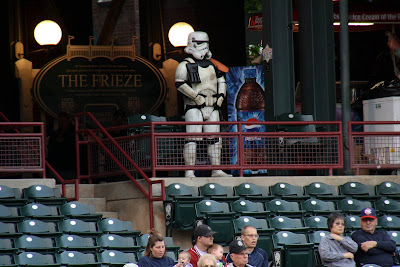 Promotions got into the act with Light Saber Limbo: 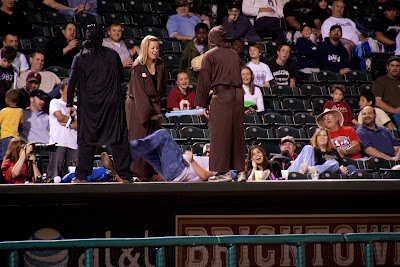 Even the ground crew was in the spirit: 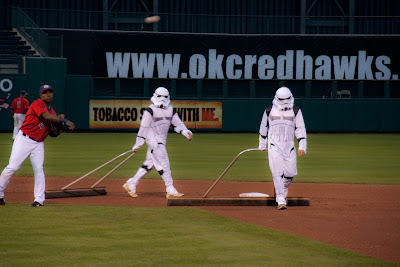 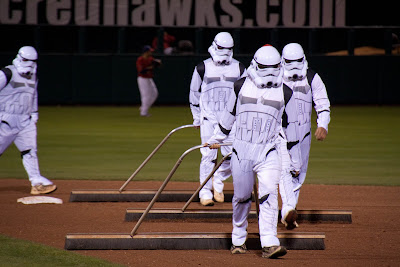 So, there you have it. Chewbacca Night at the Brick. For this season, we bought a mini-season ticket package (7 games, all Fridays or Saturdays), but we can occasionally get free tickets from my wife's employer. I am looking forward to seeing what crazy promotions there will be this year and trying to go to those games.


Update: Our 7 game ticket package for this year includes a promotion with Purina. They are bringing their Incredible Dog Team to The Brick.

Additional Update: In case, anyone is wondering about the genesis of this blog's title click here. Take the time to watch the whole thing. You'll thank me. It is one of the classic TV sitcom moments.
Posted by carlsonjok at 5:36 AM