If y'all don't read Ted over at Crinkly Wrappers, you should. In addition to being a great writer, he is a man somewhat after my own heart, with a fondness for vintage cards. Of course, he is a more advanced collector than I am, what with him working on 1954 (and picking up some of the old tobacco cards) and I'm just getting started on the 1970s. Let's just say I aspire to his level of collecting.

So, a while back, he posted about trying to finish the 2009 Upper Deck Icons set. I had some of them lying around that I picked up in one of those "10 packs for $10" specials at Target. I offered them up in hopes of being able to work out a trade for the Topps 2011 Series 1 cards I needed. Of course, being a new collector, I didn't have anything he needed. But, he was gracious enough to send me 6 out of the 7 Series 1s that I needed to complete the set. The crown jewel of the set was obviously the Ichiro, although when you have 323 out of 330 cards, every pickup that closes a gap is precious. 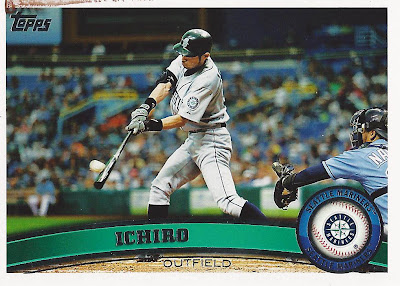 Alas, I had nothing to offer in return, so I am going to keep my eye on his Topps Heritage want list (once he posts it) and do what I can to return the favor. By the way, that smudge in the upper left hand corner of the image is on my scanner. The card is pristine.
Posted by carlsonjok at 11:09 AM