The Good, The Bad, and The Ugly

The card shop is a mess. There is a gross level of organization there. Shelves and cases are generally organized by sport. Recent and vintage have their own areas. Commons are kept separate from stars. Anything of real value is kept behind glass. But that is where it ends. While the shop is not going to be appearing on an episode of Hoarders, it is really in need of a concerted effort at better organization. For example, I went in there for the first time back in January to work on my 1978 set. At the time there was a number of loose stacks of mid-to-late 1970s baseball cards sitting on top of one of the glass cases. It looked like he had just taken them in and hadn't organized them yet. Two months later, those same cards are sitting in the same spot. I am not the most organized person in the world (ask my wife), but it drives me nutty.

Another thing: he has loose pack vending boxes sitting on some of the cases. No problem, except that they go back to 2007 and he is still charging full retail for them. Furthermore, he had one box of 2011 Series 1 loose packs. One. And hadn't got any 2011 Heritage in yet.

All things considered, I don't think the shop is his major source of income. There is rarely anyone in there. I don't see how he could make a living with the dearth of business. But, he drives a pretty sweet Lincoln MKS and his wife has a beauty shop right next door. My best guess is that he owns the plaza and the card/memorabilia shop is just a place for him to be during the day and a means to indulge his hobby.

All in all, I will still shop there for my vintage cards, since he prices fairly. But, I guess I am stuck with retail (or driving 45+ minutes up to OKC/Edmond) for any current sets I decide to collect. 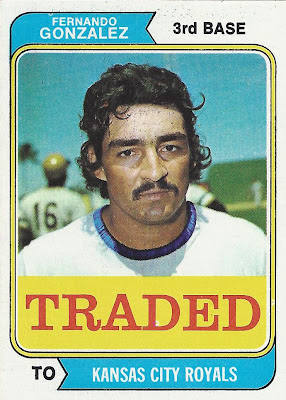 Okay, not specifically ugly, but he does look like an extra in the movie "Treasure of the Sierra Madre." Gonzalez didn't last long in Kansas City. He played in 9 games, gathering 3 hits in 21 at bats, before being purchased by the Yankees on May 5, 1974. Subsequently, he spent time in the minors and the Mexican League, was reaquired by Pittsburgh and closed out his Major League career with San Diego. 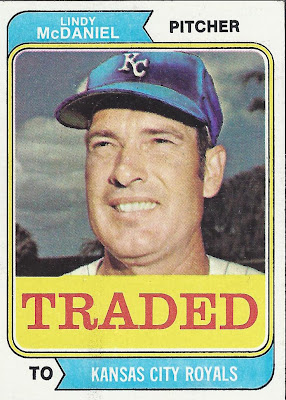 McDaniel was a premier reliever in his day, making 987 appearances over 21 years in the majors, 913 in relief. Interestingly, he was born in my adopted home of Oklahoma. Although he hails from the town of Hollis, a widening in the road in the far southwest corner of the state, a three hour drive from Norman, he did attend and pitch for Oklahoma University here in town. What is important to note here is that whomever Topps paid to airbrush McDaniel into a Royals uniform phoned it in. Oh, they did a competent job on the hat, but managed to leave him in Yankee pinstripes.
Posted by carlsonjok at 11:56 AM