I just received the fruits of my first trade in the mail today from the world famous Nachos Grande. I sent him some 2011 Topps inserts and Diamond parallels that he needed in exchange for 11 of the base set that I needed. Now, you may wonder why I would trade inserts and parallels for the more common base cards.

It is simple. My collecting interests are as follows:

I am focusing my time and effort on the first two. Finishing the 2011 set is a much lower priority. I basically pick up a few packs of 2011s whenever I do the grocery shopping. Finishing the base set is achievable without impinging on my main priorities. Chasing after the inserts just seems like too much a bother and too much time. Besides, I am really don't like the Diamond parallels (but more on that some other time.)

I have gotten to the point now with 2011 (I have 313 out of 330 Series 1 cards) that whenever I pickup some cards at the store, it is unlikely I will get many cards that I need. For example, the other day I bought a 36 card jumbo pack and got 1 card that I needed. At this point, I am going to stop buying at the store and try and fill out Series 1 with trades.

I guess, though, that it is poor form for me to prattle on without showing a card or two from my trade haul. Here are my two favorite cards: 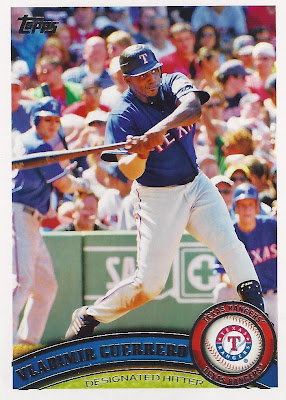 I love the picture on this card. Some people might not like the fact that the end of the bat and Guerrero's feet are cut off, but that doesn't really bother me. The heart of this card is the intensity in his eyes and motion blur in his hands. You just get the sense that he is going to just cream the ball. 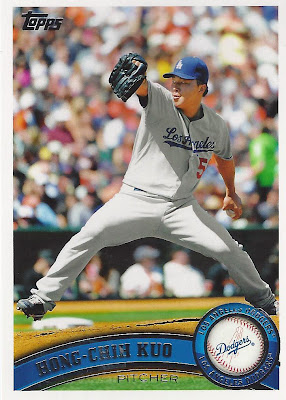 I like this for two reasons. First, because it reminds me that baseball is truly becoming an international sport. There are enough players now from outside of North and Central America that they are no longer considered oddities. Second, this is another great photograph. I like the background bokeh in the image, which conveys the notion that there is a crowd at the game, but obscures enough detail that it doesn't distract from Kuo about to deliver a pitch. It doesn't even bother me that he is a Dodger.

So, there you have it. My first trade post. Go me.

Coming soon: My quest for Paul Blair cards has turned up another oddball. It is considerably odder than my previous oddest card ever and should provide the basis of a decent rant.
Posted by carlsonjok at 5:30 PM