Saved by the Mail

The last time I was up at Al's Sportscards in Edmond I signed up for his email list.  Earlier this week, I got an email from him about his mini-show next weekend and the email also mentioned he just bought a vintage collection that included about 72 total 1971 high number cards.  So, I made my way up there today to check it out.  I am 19 cards from finishing the 1971 set.  Of those 18 are high numbers (the other is Bob Gibson, card 450.)

When I asked to see what he had, he reported to me that they had already been picked over a few days previously. Undeterred, I set the binder down on a clear section of counter and leafed through the pages.  Sure enough, about half the cards remained and, woe is to me, none of them were cards I needed.  So, I handed him back the binder, thanked him for his time, and left.  Now, it wouldn't be so bad if Al's was in my town, but Edmond is nearly an hour drive from Norman. So, almost two hours out of my day to come up emptyhanded.

All the way back south, I contemplated stopping by The Dugout, my hometown card shop, and paw through his 1973 commons. It seemed I had the itch and needed to scratch it.  In the end, though, I decided to just head back home.  There is a two day show in OKC the weekend of March 9 and I decided to save my money for that show in the hopes of having better luck finishing off my 1971 set.

My disappointment was not total as one of my recent Ebay purchases arrived in the mail today. 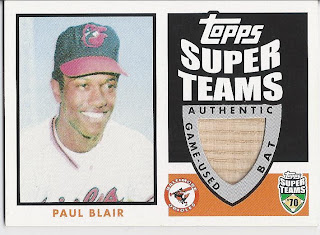 I was only vaguely aware of this cards existence and the auction I won was the the first time I believe I have ever seen this card for sale.  It is the 94th unique card in my Paul Blair player collection and I am tickled to death to have it.

I still have about 4 more EBay shipments coming as I went on a full court press to finish my 1974-75 Loblaws hockey sticker album with the last of the money I collected by selling off my Topps Heritage sets. But, more on that later in the week.
Posted by carlsonjok at 4:17 PM