The "Joy of a Completed Page" post is not original to me.  So many card bloggers use it that I suppose that it's origins have been lost in the mists of time. Nonetheless, since I have few original ideas and little to talk about, I am going to appropriate it's use and add my own little twist.

Part of my morning routine, apart from feeding our horses, is to check the new EBay auctions that cropped up over the previous 24 hours for various items I am looking for.  One of the saved searches I have is for the 1974/75 Loblaws hockey stickers.  My progress had stopped when I couldn't any reasonably priced lots of stickers. I would see a lot of single stickers posted for the low, low price of 1.29 and 3.00 shipping. But, having vowed to spend no more than a dime on commons, I gave them a pass.  There was also auctions for small groups of 3 to 12, and for single strips of unperforated stickers.  But, again, the prices were too high for my liking.

But, one day last week, while reviewing the new auctions, I came across one that I couldn't refuse. It was for about 40 unperforated strips and several hundred individual stickers.  It was an auction, but had a Buy-It-Now price of $25.  So, without hesitating, I hit the BIN and bought them. They arrived on Monday, and I have spent most of the past two evening sorting through them and updating my album. I have made excellent progress overall.  There are 324 total stickers in the set and, after this auction win, I am down to needing 46 to go to complete it.  I still have some big names to go like Bobby Clarke, Bobby Orr, and Stan Makita.  And the Bobby Orr will be expensive as I have never seen one on EBay for less than $10. But, luckily, I have other big names like the entire Sabre's French Connection line (Rick Martin, Rene Robert, and Gilbert Perreault), Guy Lafleur and Bernie Parent.

But, the real joy of this lot was the completed pages. 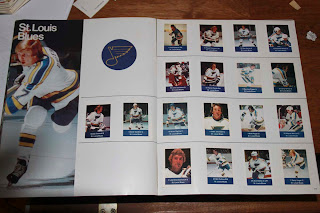 Interestingly, I have completed both expansion teams that joined the NHL in the 1974-75 season. 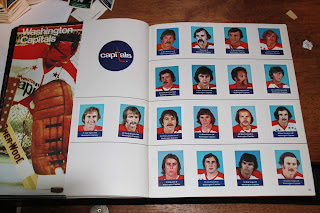 The Washington Capitals still exist, although they have never won a Stanley Cup. They did actually make it to the finals in 1998, but were swept by the Detroit Red Wings. 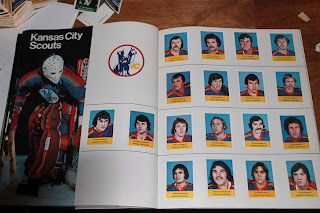 The Kansas City Scouts only played for two years and, after the 1975-76, season moved to Denver and became the Rockies.  In 1982, the team moved again, becoming the still active New Jersey Devils.

So, there you have it. Three (3!) completed pages. Things may get quiet around here. Due to some some unforeseen circumstances, my wife and I have some family obligations we need to deal with.  And, since I am lousy at coming up with original content when pressed for time (which is all of the time now,) I probably won't have a lot to talk about.  But, I will still be reading your blogs!
Posted by carlsonjok at 4:04 AM

Email ThisBlogThis!Share to TwitterShare to FacebookShare to Pinterest
Labels: 1974-75 Loblaws