Still haven't made any progress on that next post in the promised series on 1970 Topps card backs. In my defense, we had a huge storm a few weeks back and I lost 7or 8 large post oak trees and large limbs off at least a half a dozen others.  So, in addition to all my normal chores, I have been slowly cleaning up that mess.

So, I am going to half-ass a post here of things that have an admittedly tenuous link to ink, in it's various incarnations.

A new addition to my Johnny Antonelli player collection, this is a 1960 Topps tattoo. I've got to get my Antonelli collection organized.  It is fine in the binder, but I haven't really done a good job of organizing the spreadsheet of haves and wants.   It is supposed to be hot this weekend, maybe I'll work on when I retreat inside after doing my morning projects outside. 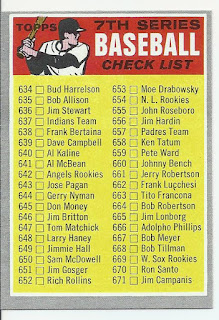 One of the three remaining cards I need to finish the 1970 Topps set is this 7th Series checklist, unmarked by either pen or pencil.  I actually have bought one of the two remaining cards for that set, but there is a problem. 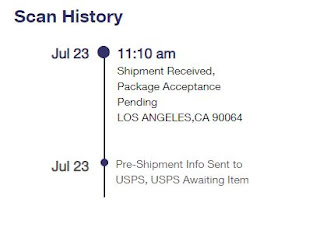 That is right, the card shipped and has been sitting in Los Angeles for over a week and a half.  This was purchased from Greg Morris Cards off of eBay. I have come to expect that such shipments will usually take 2 or 3 days to clear the LA distribution center.  But, this is way beyond that.  While I get that the Post Office is struggling with difficulties imposed by the COVID-19 pandemic, I have to say that this isn't that.  This isn't a long simmering degradation in service. This happened all of a sudden early in July. There are stories being reported in the media about changes being made by the new Postmaster General that are bollixing up service, they aren't really breaking through the general election year noise being generated by the political class at the moment.  Here is a good article discussing the issue.

And finally, a new non-sports addition to my collection: 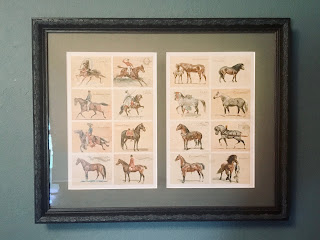 In a recent auction held by Vintage Non-Sports Auctions, I managed to pick up the two bookplates shown framed above.  They use the artwork for 16 of the cards from the 25 card 1892 N101 Duke "Breeds of Horses" set.  I am led to understand that these bookplates were contemporary to the same era.  Anyways, I just got it back from the framers yesterday.  I was looking for a Victorian feel and I think we captured it. Even if the Arts & Crafts wall color doesn't really match up well.  Now, I actually have to start building that N101 set. I don't have any yet, as they have tended to sell individually for $10-$20 dollars. That isn't horrible, but I have been able to acquire other horse themed tobacco card *sets* in the same range and it has been a little off-putting to get one card for that price.

What I am listening to: You Can't Rule Me by Lucinda Williams

Posted by carlsonjok at 5:56 AM