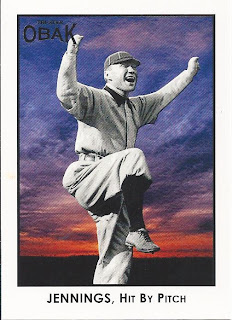 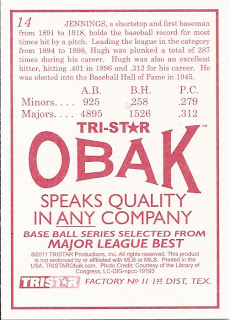 When most people think of career leader in hit-by-pitches, their thoughts naturally gravitate to Ron Hunt. However, Hunt is not the career leader in HBP. It is Hughie Jennings, who had 287 HBPs to Hunt's 243.  Jennings also nudges out Hunt for the single season HBP record, 51 to 50.  Hughie achieved that during the 1896 season, where he also hit for a .401 BA.  He had an incredible .472 OBP that year, 85 points of which were contributed by hit by pitches.

That is all for now. If anyone is proficient with the PI Index at Baseball Reference that can help me, drop me a line.

What I am listening to:  How to Love Me by Kristen Ward

Posted by carlsonjok at 6:52 AM

Email ThisBlogThis!Share to TwitterShare to FacebookShare to Pinterest
Labels: 2011 Obak