A bubble mailer arrived, quite unexpectedly, in the post today.  They were from Night Owl, a reward, if you will, for submitting a winning entry in his recent Define the Design contest. This was actually my second winning entry in that continuing series. My first can be found here. 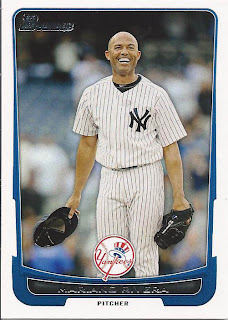 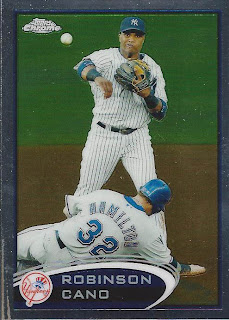 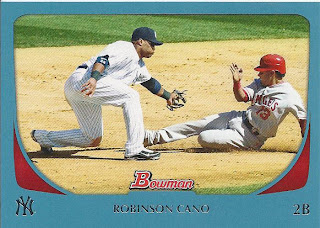 He sent a nice set of  2011 and 2012 Yankees, including a fair amount of Allen Ginter, which for some darn reason, I didn't show here.

A & G is a set I try hard to love but can't quite bring myself to.  It is a set I can just be friends with.  I make no bones about my love for Tristar Obak, a quirky little set that seems to have died after a three year run.  Allen & Ginter also falls into the quirky category, but it just doesn't measure up to Obak.  I think it is because the Obak is put together simply, where A&G is not.  Obak consists of a 120 card base set (with 2 different parallels) , including about 20 short prints, and a single insert set of T212 minis.  Over the three year run, the mini insert set shrunk from 68 cards in 2009 to 24 in 2011.  Tristar is thoughtful about content,  and makes the set hard enough to put together to be interesting, without making it overly complex and impossible.  And, they seemed to be self-aware enough to correct the excess of the first issue in subsequent years.

A&G tries to hit the same niche, but makes all the same "Topps" set decisions that we hate.  A lot of short prints, numerous insert sets and parallels. In short, Topps seems to think of a little of something is good, a lot of the same thing is better.  At one time, I calculated that a master set of 2011 Topps baseball (Series 1,2, and Update) would run nearly 6000 cards just in the base set and base set parallels.  At the time, I didn't bother figuring in the myriad insert sets. In short, Topps is one of those intense adrenaline junkies that no one likes because their only interest is to be more extreme than anyone else. There is beauty in simplicity, but that is a concept completely foreign to Topps.  They are the Kardashians of the collecting world.  A&G mirrors those excesses and I cannot bring myself to enjoy it.

I keep coming back, in my mind, to the recent death of Chris Stufflestreet, one of our most knowledgeable and generous card bloggers.  Without delving into theological issues, on which I know I diverge from many of you, I have had occasion to ponder what Chris' legacy is and how best I can honor the kindness he showed me.  I didn't save it at the time, but in the package of cards he sent to me earlier this year, there was a note talking about the healing power of cardboard.  It seems like a silly notion, but I think it is true in a way.  I was wallowing in self-pity at the time due to being laid off at work. Despite having his difficulties in his personal life at the time, he took time to search through his card collection to help me along on a set I had been building prior to losing my job. And he was right, receiving that pack was a pick-me-up I sorely needed.  It is a kindness I was not able to fully repay before we lost him.  But, it is a kindness I still intend to honor.
Misgiving
There has seemed to be a fair bit of malaise running through the baseball card collecting blog-o-sphere lately. We have lost such names as Crinkly Wrappers, Sewing Machine Guy, and Just a Bit Outside (to name but three). Even such éminence grise as Night Owl and dayf have poured some of their angst over the state of the hobby out onto the pages of their blogs. And I must say that I share some of their weary resignation.  While I don't have nearly the history with the hobby that they do, I do get where they are coming from.

But, when I see such posts, it bothers me.  Even though I have never met a single one of the card bloggers, I feel like this is a community. And a special one at that.  Over the years, I have belonged to my share of clubs out in the real world. And I have been a member of more than a few online communities.  The one constant in all those groups is, unavoidably, strife.  We live in a diverse world and even when people share a common interest, they have divergent ways of embracing it.  And inevitably this leads to conflict as the various factions work to assert their One True Way (tm).

The card blogging community, however, is strangely void of such internecine struggles.  Even though we all collect differently, we seem to get along and don't judge each other, either for our collecting style or our favorite teams.  For someone new to the hobby, that is a blessing beyond measure.

It's unique and, I suppose, it makes the loss of a member that much more acute.  I don't like to see members drop out, even though I understand and accept their reasons for doing so.  I don't like to see others struggle with the extent and scope of their participation in the hobby, even as  I do so myself.

2011 was my first real year back in the hobby and I embraced it fully. I would find that the shortage of butter wasn't something that could wait until the Saturday grocery run. Oh no, the lack of butter needed to be solved immediately with a trip to the store, where, quite conveniently, I could buy cards. I didn't just embrace the hobby, I bear hugged it.  I put together all three series of Topps flagship, Lineage, and made a concerted run at Heritage.  I dabbled in completing early sets of Heritage. I completed 3 vintage sets and started on two more.


But, a funny thing happened.  2012 rolled around and I found out that I stopped caring.  My complete Topps flagship and Lineage base sets were sold off on EBay for a pittance.  I didn't buy a single pack of 2012 flagship, Gypsy Queen, Bowman, or A&G, and only one blaster of Topps Archive.

With it being made from real cardboard and based on vintage designs, I still carried a torch for Heritage. I made another run at the contemporary set.  But, here I am at the end of another year and I didn't finish it. Hell, I still haven't finished last year's Heritage.  And, to top it all off, I made no progress whatsoever on any of the other, previous Heritage offerings that I had intended to build. Now, as this year ends, I look at those binders with a jaundiced eye. Why should I chase 75 short prints of a set that evokes the feel of vintage sets, when I am more interested in the vintage sets themselves?  How best do I allocate my resources in order to maximize what I can accomplish?

One of the first things they teach you in B-school is not to honor your sunk costs. No matter how much money you sink into a project if, if it isn't financially justified to move forward, you don't sink another penny into it. You walk away.  I can apply this ruthlessly in my work, but I sit here and stare at my Heritage binders and cannot walk away.

The time will come when I either rekindle my love for Heritage or give it up. There is no need to rush it.  That is the beauty of a hobby.  It isn't business and you don't have to treat it as such.  So, for now, I will continue to work my vintage sets and plug away at other sets which catch my fancy, like Obak or Fleer Greats of the Game.

As we approach the holiday, it is natural to sit back and reflect on what we have to be thankful for.  Despite a problematic start, I have much to be thankful for in 2012.  And the card blogging community is on that list.  Even though, by eschewing most of the modern cards, my trade activity has dwindled almost to nothing, I still enjoy reading your blogs and sharing your excitement.

What I am listening to: Runaway Train by Soul Asylum.

Posted by carlsonjok at 8:32 PM