In Which I Take Willie Mays Hostage


This weekend is the October card show up in OKC and probably my last such show until after the holidays are past.  I had stashed some cash away previously, combined it with my monthly allowance and walked into the show with the princely sum of around $200 in my pocket. I normally don't take near that much, but today I had some specific goals which made it necessary to spend a little heavy.  My goals were as follows:

I only managed to actually succeed on the third goal, but half completed the first goal.  There were two specific dealers that tend to have a lot of 1971s and I was hoping one or both would be there. Neither were, leaving me to look at table after table of MOJO!!11!111!!!!  However, Zach and Bill from Wichita were there, so it wasn't a total loss.  Bill is an older gentleman, a retired investment banker, who I was to buy my big ticket card from.  Zach is a younger guy, who I buy from at every show.  He always has a decent selection of high end cards, but also a lot of big 3200 count boxes of midrange vintage commons. I started with him and  managed to find 10 commons from 1960 Fleer for a dollar each. 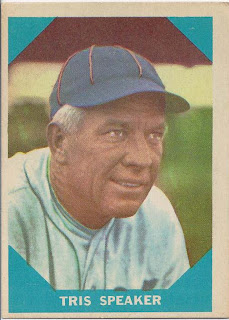 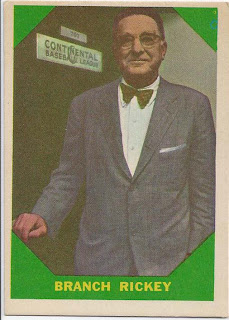 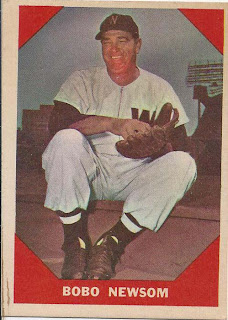 The cards were all really clean. Other sellers I have dealt with would have priced them at $2, which I might have paid.  I also managed to find 3 commons for 1961 Fleer, also for a dollar each. 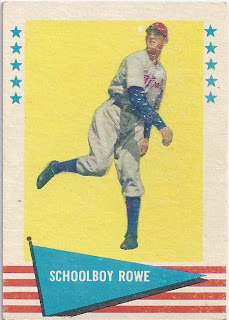 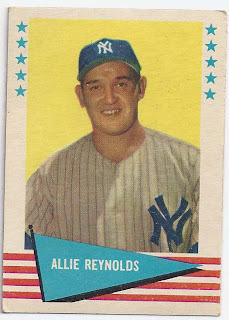 Zach also had a small stack of 1963 Fleer and I found an additional 2 commons, and one star card, for that set that I needed. 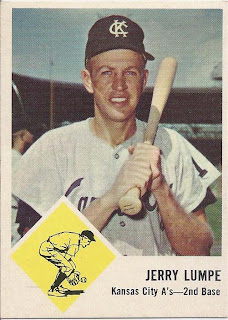 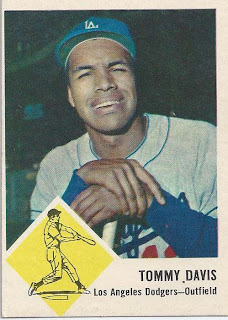 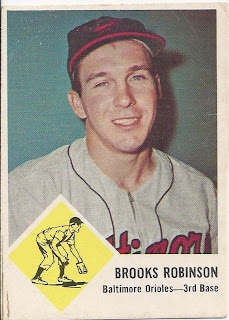 Forgive the grunge on the left side of that Brooksie image. That isn't on the card. My scanner just needs to be cleaned.

After concluding the deal, I wandered down to Bill's table to get my card we had agreed on a couple weeks back.  Alas, he left my card at home and said he would mail it to me on Monday.  So, I looked over what he had at his table. He is sort of an odd dealer.  As a retired investment banker (who still swings a few deals in his retirement), he doesn't need to sell cards. He does it for the fun and normally will sell things at slightly more than his cost. So, his merchandise is generally more limited than other dealers and is usually a mish-mash of stuff without much rhyme or reason..But, he will always have some interesting stuff. So, when you are at his table you need to scan carefully to make sure you aren't missing anything. This time, he had one T206,  some neat 1939 Play Ball and a stack of close to 60 1950 Bowman cards that he was selling for $100 (some were nice, but most were rough).

One thing did catch my eye. 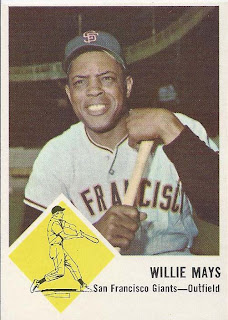 I have been working on 1963 Fleer since last December but haven't made any progress in 2 or 3 months. Unfortunately, among the remaining are cards I need are ones like Willie Mays and Roberto Clemente (which book at $200 each.) I've been dreading getting those cards because they are so expensive.  But, having gotten over my nausea from closing a deal for over $100 for a card, I waded in anyways and he gave me a more-than-fair price for this one without me getting cold feet.  And it is a beaut.  Clean, sharp corners, and still has the original gloss on the front. The top to bottom centering, at 10-90, is the only weak point.

I am now in striking distance of completing this set, needing only 11 more cards to finish, including the aforementioned Clemente, Don Drysdale, and Warren Spahn.

So, we turned out conversation to the logistics of getting my other card to me.  I went ahead and paid him at the show, since I trust this guy. He said he had set the card aside for me and was pretty sure where it was.  Further, he said, if he couldn't find it he'd send me my money back. I offered him an alternative plan.  Pointing at another card on his table, I said that if he couldn't find the original card that we closed a deal for, I'd take that one.  He picked it up, handed it to me, and said "take it, it will be safer with you."  I protested quite sincerely that I didn't want to take what I hadn't pay for, but he was insistent.  Eventually, I relented. 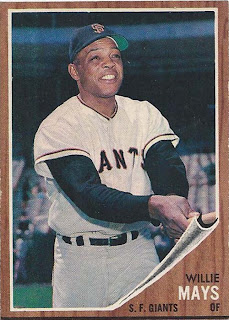 And that is how I came to take Willie Mays hostage.

It is a nice card with solid corners and good gloss. I would put it in the NM range. It's only flaw is that it is miscut, as you can see by the solid line at the bottom. I assume it is a guide line for when the cards were cut at the factory.  The thing is that the top border looks close to correct to me. It may be a a tad narrow, but not enough that you should see the top of an adjacent card at the bottom. So, I held it up against another card and this one is actually cut a bit longer than it should be. Not surprisingly by about the width of that line.

Once (if) my other card arrives, I will send this 1962 Willie Mays back.

Or send a check to buy it.  At this point, with a 3 month card drought facing me, I am guessing I will opt for the latter.  Which, I am savvy enough to realize, was the seller's plan all along.  I generally pride myself on recognizing the tactics salesmen employ.  Resisting them is, apparently, another matter.  I guess we'll see later this week. I will be dropping an envelope in the mail.  Who knows what the contents will be.

Having completely spent my money in the space of about 30 minutes, I stayed a while and talked with Bill and Zack and then headed home to mow my lawn one last time for the year.  Last show of the year, but head and shoulders my favorite.