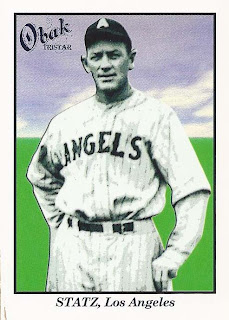 Who is the number 4 all-time hits leader in organized baseball? "Jigger" Statz, that is who.  With 3356 hits in the PCL on top of 737 as a MLB player, he comes in just behind Hank Aaron (who's combined total was 4095.) 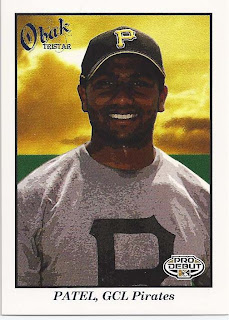 Get this. Dinesh Patel, above, won a baseball reality show that was on Indian TV called "The $1,000,000 Arm" and signed a pro contract with Pittsburgh.  He made 15 appearances over two seasons with the GCL Pirates and his career was done. Co-winnder Rinkhu Singh is still kicking around in the lower reaches of the Pittsburgh chain and also plays in Australia. 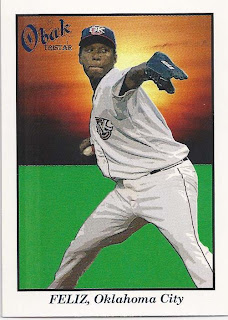 Having seen a decent number of minor league games over the last few years, Feliz is still the biggest I-saw-him-before-he-hit-it big player I saw before he hit it big.  He was a starting pitcher when I saw him with the OKC Redhawks and he was a starting pitcher again this year before getting taken down by Tommy John surgery.   That Tommy John guy is a menace.  He needs to be banned from baseball. 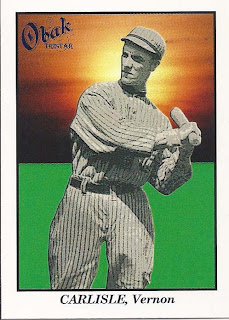 Walter Carlisle's claim to fame is being the only known outfielder to complete an unassisted triple play. Borrowing from Baseball Reference "Carlisle made a diving catch off the bat of Roy Akin just behind second base with runners on first and second, but the runners had taken off with the hit, so he touched second, and then ran by himself all the way back to first to complete the triple play." 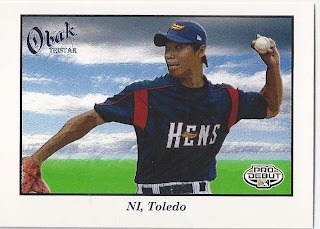 Bring me a shrubbery!

Okay bad joke.  Fu-Te Ni spend 4 years in the Tigers organization, spending some significant time up top in 2009 and 2010. He was released in August of this year. My admittedly cursory research didn't turn up what, if any, future plans he has. Although, I would expect that he will land in a foreign league somewhere. 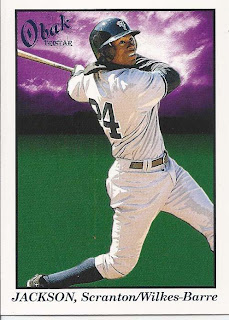 I have been starting to wonder about the value of the Curtis Granderson for Austin Jackson trade this year as Grandy has turned into a latter day Dave Kingman with a lot of power, but a low batting average and way too many strikeouts.   I didn't feel any better when I saw that Jackson has a significantly high OBP.  For my money,  the Yankees should let Granderson go and focus on keeping Nick Swisher. Move Brett Gardner to centerfield and signup Ichiro for another year to back fill Gardner in left.  But, I would bet Brian Cashman is more likely to let Swisher walk and keep Granderson.

That really wasn't about Austin Jackson, was it?  Ah well, that is what I get when I don't actually plan posts out. 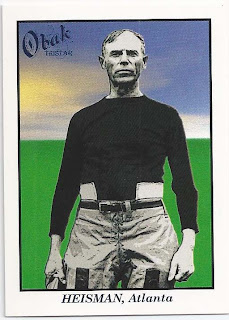 Yes, that Heisman. Apparently he was also, at one time, president of the Atlanta Crackers of the Southern Association. Heckuva nickname, though it's exact origin is unknown. 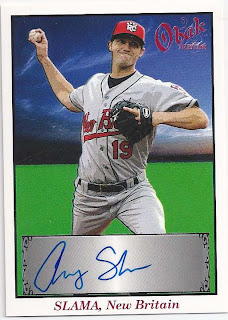 And my final auto from the box. Anthony Slama, who has jsut concluded his 4th year at AAA Rochester, with only a couple cups of coffee in 2010 and 2011. Frankly, I don't get why Minnesota doesn't like this kid. His minor league stats are solid. The rumor is that Ron Gardenhire doesn't like that many of his strikeouts (of which he accumulates A LOT) are looking rather than swinging. I suppose that the thinking is that it won't translate at the majors because of better hitters, but you would still think a team as pathetic as the Twins would at least give him a good look.

So, that is the end of my second box of 2009 Tristar Obak. I have a box of 2011 Obak to share, as well as a few cards I picked up at yesterday's mini-show. I'll try to knock them out as quick as I can. There is the bigger bi-monthly OKC show in two weeks and I'd like to have the decks cleared by then.  I think I am going to take a different approach to the 2011 Obak to try and make the posts more interesting and informative.  If anyone out there is still reading, stay tuned!

What I am listening to:  "The Walls of Laemnil" by Fairyland

Posted by carlsonjok at 6:30 AM